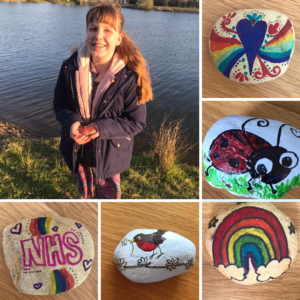 A talented schoolgirl has shown her appreciation for the NHS staff who cared for her by painting and selling rocks she finds on her daily walks.

Rubie, or Rubie Rocks as she’s now known, has raised £650 through lockdown after deciding she wanted to help give something back.

The eight-year-old girl from Wivenhoe was looked after by the “nice and caring” staff at Colchester Hospital after her appendix ruptured during Easter weekend last year. She then had to return to hospital a few weeks later when an infection spread, followed by a further trip when drains put in then twisted inside her.

Rubie is now fully recovered but had to spend nearly two weeks in the high dependency unit at Colchester Hospital, and missed a term of school while she was poorly.

As part of her recovery, Rubie enjoyed arts and crafts in hospital.

The Year 4 pupil, who attends Broomgrove Junior School in Wivenhoe, said: “I really like arts and crafts. When I was in hospital it was the arts and crafts table I liked to go to most.

“I thought it would be nice to do something for everyone in the NHS, as they helped me get better when my appendix ruptured.

“I have painted lots of different pictures on the rocks, but my favourite is the heart with rainbows. I’ve painted sunflowers, animals and even done some that are decoupaged using napkins.”

Mum Coralie said Rubie started reading a business studies book she found on a shelf at home and it sparked the idea of how to raise money.

Coralie, a virtual assistant for Argem, said: “Rubie said she wanted to write her own business plan for the idea. I thought ‘well who am I to dim her light’, and helped her plan the marketing and finances around it.”

With the help of her mum, Rubie even set up her own website Rubie Rocks.

“She designed it, came up with the name, told me what she wanted to say on there and added photos.” Coralie added: “I shared it on my Facebook feed and Rubie said she was so nervous in case she didn’t get any orders.”

Overnight they flooded in, with the charge of £3 for each rock, plus £2 if they needed to be posted.

Rubie’s parents said they are very proud of her, and so are her teachers.

Coralie said: “Everyone has been so supportive. Her teacher thinks it’s a great project, and her music teacher even ordered one with musical notes on it.

“We’ve decided to stop taking any more orders now, but we’re so grateful to everyone who has bought one. It’s meant so much to us, it really has.”