A revolutionary ‘colon capsule’ is set to help speed up the diagnosis for some patients with suspected colorectal cancer for patients in Suffolk and Essex.

Currently patients needing further investigation into issues relating to their bowel would normally go into hospital and have a colonoscopy. This involves inserting a long flexible camera up a person’s back passage to look inside their colon and help diagnose issues such as ulcers, diverticulitis or a tumour.

The colon capsule works in a similar way, but by the patient swallowing the jellybean-sized capsule which contains two tiny cameras. It takes four pictures every second as it passes through a patient’s system – most importantly of the lining of their bowel – so doctors can see what is happening inside. 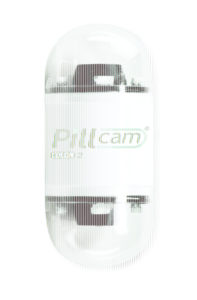 Close-up image of the jellybean-sized capsule

Dr Mary McStay, consultant gastroenterologist based at Colchester Hospital, is one of the team working on a national pilot study in England (via the East of England Cancer Alliance) to assess how effective the colon capsule will be investigating patients referred for urgent investigation of symptoms suggestive of colorectal cancer. ESNEFT is the first Trust in England to trial the project which launched this week (8 February).

She said: “This is a very exciting development, as it means patients needing these really important investigations can have them done as an outpatient and it will speed up the process and diagnosis.

“The patient will be able to go home rather than stay in the hospital while the procedure is done.” 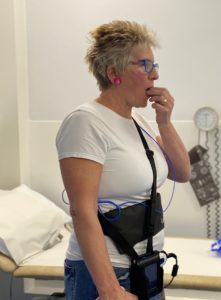 Dr McStay continued: “The patient will need to take some laxatives at home before the test to prepare their bowel. They will then come to the clinic and be fitted with a sensor belt and data recorder where the images are stored. After they swallow the capsule they can go home and let it run its course.

‘’The technology is so clever; the recorder beeps to tell the person when to take more laxatives to help the capsule pass through the bowel and when the capsule has left their body.’’ 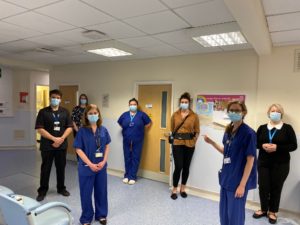 Once the readings are taken, the patient will need to return to hospital the following day to drop off the belt and data recorder for analysis. If the test is normal, patients can be reassured and discharged to their GP. If an abnormality is seen they will be invited for a colonoscopy.

Patients who may have already had a poo test and are deemed to need further investigations will be considered for the colon capsule procedure, which has already been used in a successful pilot in Scotland.