Richard, who works with the Stroke Team at Ipswich Hospital won the individual gold medal, as well gold in the three-member team event in the event which requires you to descend hundreds of feet through the air and land on a tiny target the size of a £1 coin. 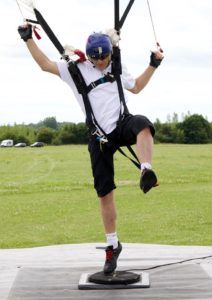 Richard landing on the target

Richard, SAS doctor (specialty and associate specialist doctor), said: “I’m delighted to win. I’ve done skydiving for years and used to be an instructor, but I really enjoy the accuracy of having to land on a set target. I’m not really into the adrenaline rush of it now, but prefer the precision of competitions like this.”

Parascending is an activity where the ‘pilot’ is attached to an inflated parachute while on the ground, then they’re towed along by a vehicle until they ‘get air’ in the sky. When the pilot decides they’re ready to be released they release themselves from the vehicle while continuing to move up in the sky before descending. 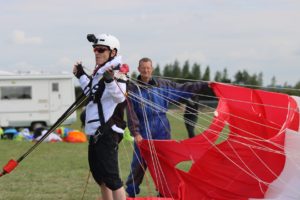 Richard as he’s about to launch during the competition

Richard, who has represented Great Britain and Northern Ireland in two World Championships, added: “Parascending means you can do a lot more jumps in a day as you don’t have to pack up your kit safely, fly up in a plane and jump.

“It’s become a bit of a way of life. I like seeing the world around me, I like the people you meet, and I delight in minimising the risks – it’s more about managing the risks rather doing it because it’s risky.”

Richard said the conditions at the Classic National Accuracy Parascending Championships in Gloucestershire were challenging as it was a windy day.