More than 150 school children from East Anglia were taught invaluable lifesaving skills this week.
Pupils from The Gilberd and Thurstable Schools in Essex and Suffolk’s Thomas Gainsborough School were among those that learned basic CPR (cardiopulmonary resuscitation) at Colchester Hospital’s Iceni Centre as part of world ‘Restart a Heart’ Day. 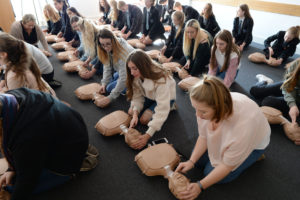 Pupils from across Suffolk and Essex were taught basic CPR as part of ‘Restart A Heart’ Day at Colchester Hospital’s Iceni Centre.

Consultant anaesthetist Joe Adams said: “The children really enjoyed the event and I heard them leaving the room saying what a great day it had been. They were really enthusiastic and gave their all.”
Across the UK, there are over 30,000 cardiac arrests outside of hospital every year, but the survival rate is less than one in 10. Without CPR the chances of surviving cardiac arrest are zero.

Dr Adams said: “There was a core message about delivering CPR – the chest compression and the rescue breaths, because we know that is one of the few things that makes a difference if the heart stops.”

Resuscitation nurse Emma Thomson who organised the event, said: “We hope no-one ever has to use their CPR skills but in reality someone probably will.

“This event will help them make that decision about whether they are able to help and not just walk by.”

The event in the Iceni Centre also raised funds for the British Heart Foundation (BHF) and CRY (Cardiac Risk in the Young) with staff from across the Trust baking cakes and donating tombola prizes.
Colchester United, Ipswich Town, Marks & Spencer and Waitrose were among those that donated prizes to the tombola.

“We had some amazing donations of cakes and prizes and I would like to say thank you to everyone that contributed,” said Emma.