Robots save time and cut down on wasted appointments in Outpatients

ESNEFT’s virtual robots are helping to reduce the number of wasted outpatient appointments.

Technology is now being used to cancel appointments automatically in our patient records system.

All outpatients are sent a text which gives them the option to cancel their appointment. Now, a virtual worker – you can’t physically see it – is notified of a cancellation request by the Trust’s text reminder service.

It can then search for the patient and appointment – just like a human would – and notifies the clinic at Colchester Hospital. The free appointment can then be reallocated and the patient doesn’t receive a ‘did not attend’ (DNA) letter in error, something which can cause unnecessary stress.

In its first week, the robots helped to give 301 unwanted appointments to other patients and prevented wasting more than £48,000. The estimated cost of an outpatient appointment in Colchester is £160. If this continues the Trust can expect to avoid wasting over £2.1million in just one year.

Going on these early figures, over the course of a year, this process will offer 15,652 appointments back to our patients and avoid the NHS wasting just over £2.1m.

If we book people in to those free slots we can lower waiting times, see more patients and clinics are more productive.

Early indications are showing it’s already had an impact on the department’s DNA rates during the higher than average winter months as previously recorded. This provides vital outpatient capacity for the booking teams to actively manage, which will improve our patients’ experience of outpatients and benefit the ESNEFT Patient Tracking list (PTL) performance position.

The DNA rate at Colchester is marginally over the 5% key performance indicator (KPI) standard and we were inaccurately recording DNAs when a patient had made every attempt to cancel their appointment. Now the robots are doing it, cancellations are being accurately recorded in the system which frees up clinic capacity so we can book people into those appointments to maximise our vital clinic availability.

We’re hoping we will see an instant improvement in clinic utilisation attendances, the DNA rate will reduce and patients will be accurately cancelled and re-booked, or cancelled completely if they wish.

This means the need for continuous validation of patients’ pathways will not be required as we have captured and recorded correctly first time.

It is hoped the automation process will also be extended to Ipswich Hospital’s Outpatients department in future.

The first team at the Trust to benefit from Robotic Process Automation (RPA) in their everyday roles were the medical secretaries at Ipswich Hospital.

Virtual workers began handling admin-style tasks, including GP referrals in Neurology. They now monitor the electronic referral system and when a new one arrives, the ‘robot’ gathers key clinical data and downloads several documents, which are recorded in Evolve ready for clinical review.

This was previously carried out by medical secretaries, including Chris Harvey, who had to print out all the documents, before scanning each one into Evolve – a process which could take between 10 and 20 minutes per referral. Now the secretaries have got that time back they can spend more time helping patients. 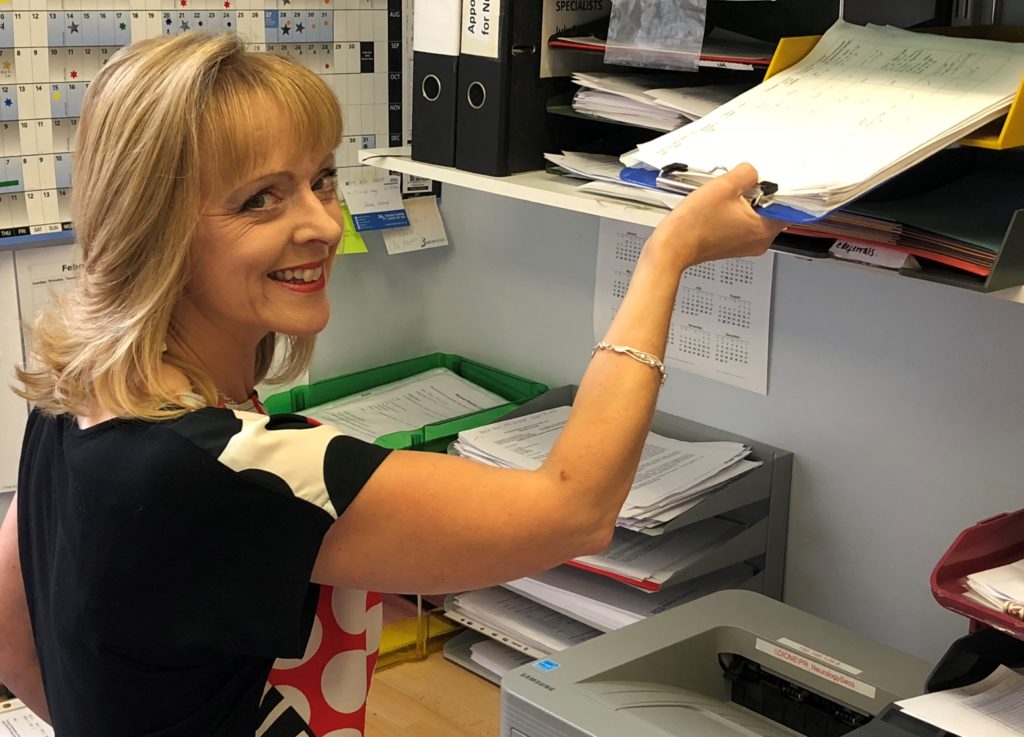 We can be on the phones, writing letters or talking to patients, we’re more available. It gives you more time to be doing all the other things you have got to do.