Rainbow Clinic is helping families that have suffered baby bereavements

Pregnant women, who have lost a baby previously, are being given extra help with their pregnancies at Ipswich Hospital.

Women and their families can book appointments at the Rainbow Clinic, based in the antenatal clinic. There, they are helped to deal with their grief and loss, as well as the fears and anxieties that new pregnancies can bring.

Members of staff from Ipswich Hospital’s midwifery team, including Ali Brett (second left), with some of the ladies that visit the Rainbow Clinic.

Bereavement midwife Ali Brett, who leads the Rainbow Clinic, supported by healthcare assistant Cherrie Davey, said: “Baby bereavement never goes away. These are real families, real women, with real issues, concerns and anxieties – every story is heart breaking. People don’t want to forget their baby and are terrified it is going to happen again.

“The Rainbow Clinic provides extra time to support couples at such an anxious time and people can attend for as long as they need.”

Zoe Hayman-Cox’s son, William was diagnosed with a life-limiting condition early in her pregnancy and sadly died just hours after he was born. She has since given birth to a daughter, Emilia, who was born in September last year, 13 months after William was born.

Zoe said: “I lost my son, William, two hours after he was born so when I fell pregnant again just five months later, the rainbow clinic was a perfect option for my husband and me.”

Jo Rawlings, who is mum to Josh (two next month), was cared for by Ali when her first baby, James, passed away in 2016.

Jo said: “Ali was there for every appointment and was so reassuring. She was one of the first people I told when I got pregnant again and the worry began to set in. To have someone there every step of the way made a big difference.”

The clinic, which runs every Wednesday afternoon, is part of the hospital’s commitment to the patient-centred National Bereavement Care Pathway (NBCP) and is based on the Rainbow Clinic at Tommy’s Centre in Manchester.

“We found some aspects of “normal” antenatal care challenging, like being sat in a waiting room around lots of people having normal pregnancies and seemingly having the best time.

“The rainbow clinic and Ali in particular gave me direct access to as much support and advice as I needed and, as a result, we were gradually able to come to terms with what had happened and to learn to enjoy pregnancy again.

“Baby bereavement is a huge taboo subject. It’s a very difficult grief. People can say they understand what you are going through and expect you to be relieved and happy when you are pregnant again.

“When I was pregnant with Emilia I did not stop thinking about William. The loss stays with you every single day – you wonder what that person would have become.”

“Your new baby is not a replacement. You don’t put your toddler out of sight when your new baby comes home. They are still part of your family.” 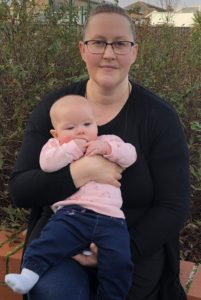 Zoe Hayman-Cox and her daughter, Emilia