A grandmother with profound hearing loss has welcomed new guidance which means more children and adults will be offered the option of having a cochlear implant. 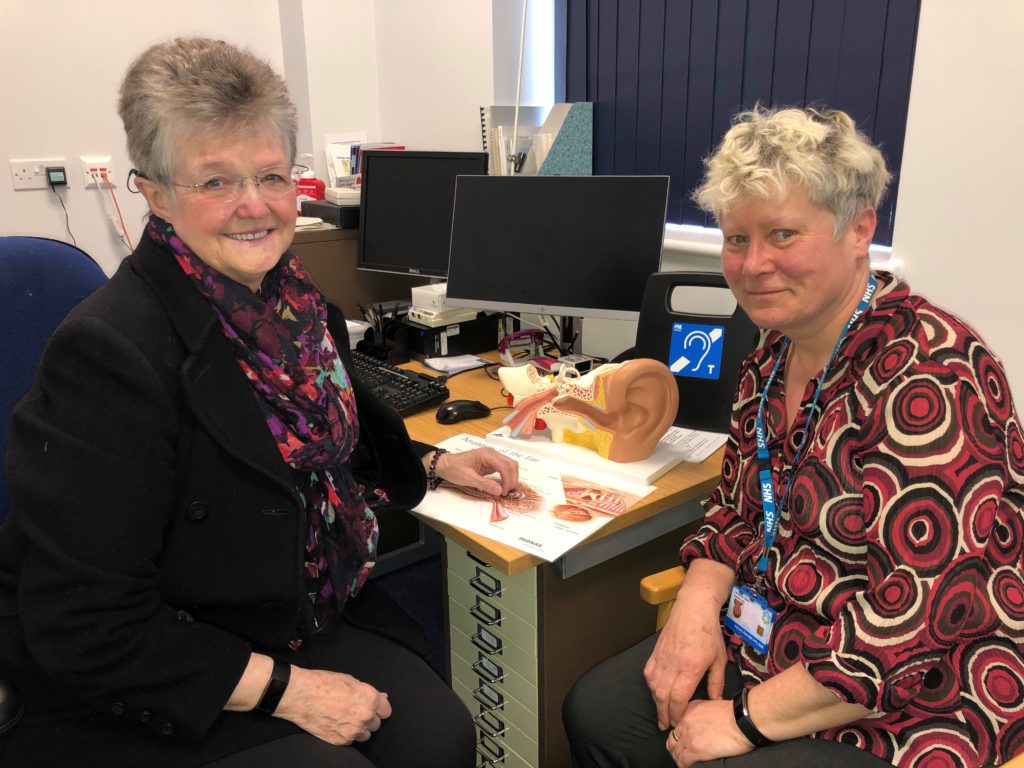 Penny Pearson, 73, from Colchester, went profoundly deaf overnight at the age of 64 in 2010.

The grandmother of 11 and mum-of-three had surgery to fit a cochlear implant in October 2014 and was ‘switched on’ two months later.

She thinks it’s “fantastic” ​NHS watchdog NICE (National Institute of Health and Clinical Excellence) has given its definition of severe deafness a rethink. It means more people could now benefit from a cochlear implant.

Penny, who is a regular face at Colchester Hospital’s staff inductions and has been a patient throughout her hearing loss journey, said: “​It’s fantastic more people with severe and profound hearing loss will meet the criteria for cochlear implants.

It’s a life-changing opportunity which takes careful consideration, hard work and dedication with the support from hearing scientists and therapists to get the best out of this investment. I do hope that investment will also go into the services which helped me make best use of my implant.

Penny used to be a line dancing instructor and was driving with friends when she went under the railway bridge at Colchester’s North Station and her hearing “just switched off”.

Penny’s son Blane also went profoundly deaf when he was 38-years-old, just three weeks after she did.

Life changed not only for us, but for the whole family, it was so so hard. My husband Malcolm has got better and better, it’s been difficult for him. When I had the implant fitted he said ‘I have got my Penny back’.

The quality of my life and that of my son has certainly been improved by having a cochlear implant. Living with a hearing impairment is such an isolating and lonely existence and anything that reduces this and enables a person to participate more confidently with everyday things can only be a positive step forward.

Penny met head of Hearing and Balance Services Lesley Chapman, who was based at Essex County Hospital at the time, around six months after she went deaf. With Lesley’s help Penny invested in equipment to make things easier at home and embraced the technology that was out there to help her. She was registered as deaf with speech and introduced to Hearing Help Essex. She also started going to Lesley’s lip reading classes.

It was absolutely magnificent. Lesley’s very straight forward and caring, she always made it about you. She teaches you to stand on your own two feet and when you get someone like Lesley that goes the extra mile, I can’t tell you what that means.

It does happen regularly. We see quite a lot of people who have sudden hearing loss. People like Penny are why I come to work. She’s amazing.

Lesley has also welcomed the new NICE guidelines. She said:

It’s great news for some people with severe hearing losses and for us it will mean we can refer patients earlier.

Penny’s cochlear implant surgery was carried out a private hospital in Cambridge, under the care of Addenbrooke’s Hospital. It was there tests revealed she was profoundly deaf – all she had been doing previously to understand and converse was lip reading.

You have to teach your brain to listen after having the implant. You can’t use your hearing aid at first, you have to work hard at listening and reading so your brain tunes in to the way a person speaks and you programme it.

It gives you sound, but not clarity of speech – no two people have the same results. I worked with a scientist after the operation and they tried to keep the residual hearing I had, but I lost that in February 2015 so it was not to be.

I saw a lot on YouTube, I wanted to see what people experienced when they were switched on – I didn’t have that. When they put it on for the first time, I didn’t know it was me speaking, the tones were totally wrong. I could hear my loved ones as normal, but people I have not met before are toneless, like Daleks.

The surgery to fit Penny’s cochlear implant caused some brain trauma and she lost 65% of her balance, which she will never get back. She has had to learn to balance with her eyes and her feet now.

It took her three years to get back to walking normally and she’s also had severe vertigo. Although Penny can’t hear the music she once loved anymore, she still goes line dancing as part of her rehabilitation.

The first year after the implant wasn’t good, but each year I go on and get more experience and the better I become. I’m not in a hearing or deaf person’s world. I’m very in tune with body language and expressions.

What is a cochlear implant?

A cochlear implant is an electronic medical device which may be an option if you have severe, permanent hearing loss which isn’t helped by hearing aids. They replace the function of the damaged parts of the inner ear (cochlea). Unlike hearing aids, which make sounds louder, cochlear implants do the work of the cochlea by turning sound into electrical signals. From here, the signals travel to the brain and are heard as sound.

Penny’s tips for speaking to someone with severe hearing loss