Sue, who began her NHS career 48 years ago in London, joined the team at Essex County Hospital in 1976, first as a staff nurse, then a sister on a women’s surgical ward and a night sister before moving on to the new Colchester Hospital as a ward manager.

It was during her role as ward manager of Langham Ward, that Sue was asked to set up a new role with Debbie as patient care coordinators in the Emergency Assessment Unit with the on-call medical team. 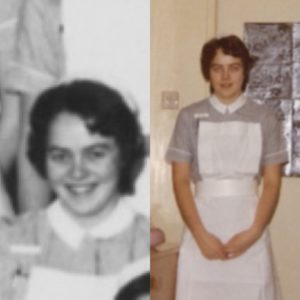 Sixty-six-year-old Sue, who has been married to Norman for 44 years, said: “The purpose of the role was to co-ordinate the patient’s journey, help reduce bed stays and improve their experience while in hospital.”

Sue and Debbie proved what fantastic nurses they are, and the role became a permanent fixture at the Trust, following the positive impact they made (along with their colleagues) to patient care. It is also where they both stayed until they decided it was time to retire. 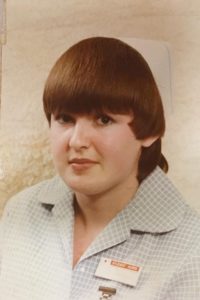 Debbie Reed at the start of her nursing career during training

Debbie, who began her nurse training at Colchester in 1980, said she’s proud of the service her and Sue have worked so hard on during the last 20 years.

The mother-of-two and grandmother, said: “I’m proud that Sue and I set up the service to ensure patients did not stay in hospital longer than they needed to and made lots of changes which had a positive effect on patient care.”

She added: “Nursing was all I ever wanted to do and I have been very privileged to have cared for so many patients and their families over 40 years – how lucky am I?” 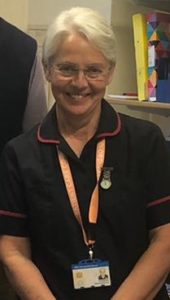 Sue, who lives in Tiptree and has two children and four grandchildren, said: “I have enjoyed working for the NHS as I feel I’ve been able to progress in my career but still be directly involved with patients. This has enabled me to use my nursing and communication skills to ensure my patients receive the best care possible.

“I’m pleased I have completed 48 years of service in the NHS. I’ve had a very privileged career and enjoyed every aspect of the various roles I have held – and yes I would do it all again!”

The grandmother-of-four said her biggest achievement during her career was winning the national Nurse of the Year award in 2000. “I was nominated by a patient and have always felt very humble and honoured by the letter she wrote for the judges. I was just doing my job, but pleased I was able to help and support her during her hospital stay.” Sue added. 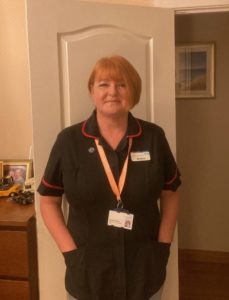 Debbie said she remembers her whole career fondly, especially her time as a ward sister on Great Bentley – now under the children’s outpatients’ department – and Peldon Ward as the team “really supported each other and laughed” but she’s looking forward to retiring and spending time with her husband Brian, who is also retired, and planning lots of new adventures, including kayaking, camping, beach hutting and “finally doing all those jobs on the house that have been neglected!” 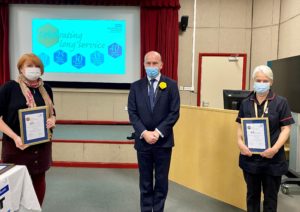 To mark their long service within the Trust, and their dedication to the NHS, Sue and Debbie were invited to a socially-distanced presentation, along with nearly 1,000 other colleagues who have reached milestones in their NHS careers.

The Trust has been marking the commitment of all those colleagues from the community and hospital bases who have dedicated more than 20 years of their working lives to the NHS in five long-service presentations.

Each person is presented with a framed certificate and pin badge marking their years of service.

A special afternoon cream tea is usually held to mark the long service of any ESNEFT employee, but due to current restrictions, the celebrations had to be changed.

Sue said: “The long service award was carried out very well considering the restrictions in place. For me it was lovely to collect my certificate the day before I retired.”