A new app at East Suffolk and North Essex NHS Foundation Trust (ESNEFT) helped to keep one couple connected with their newborn twins when they were being treated on different neonatal units nearly 60 miles apart during the Coronavirus (COVID-19) outbreak.

vCreate, which allows videos and messages to be securely shared with new parents, has been keeping families updated on the progress of their babies throughout the pandemic at hospitals run by ESNEFT.

The free, NHS trusted app was first launched at Colchester and Ipswich hospitals when, in line with national guidance, hospital visiting had to be restricted as the outbreak worsened across the country. 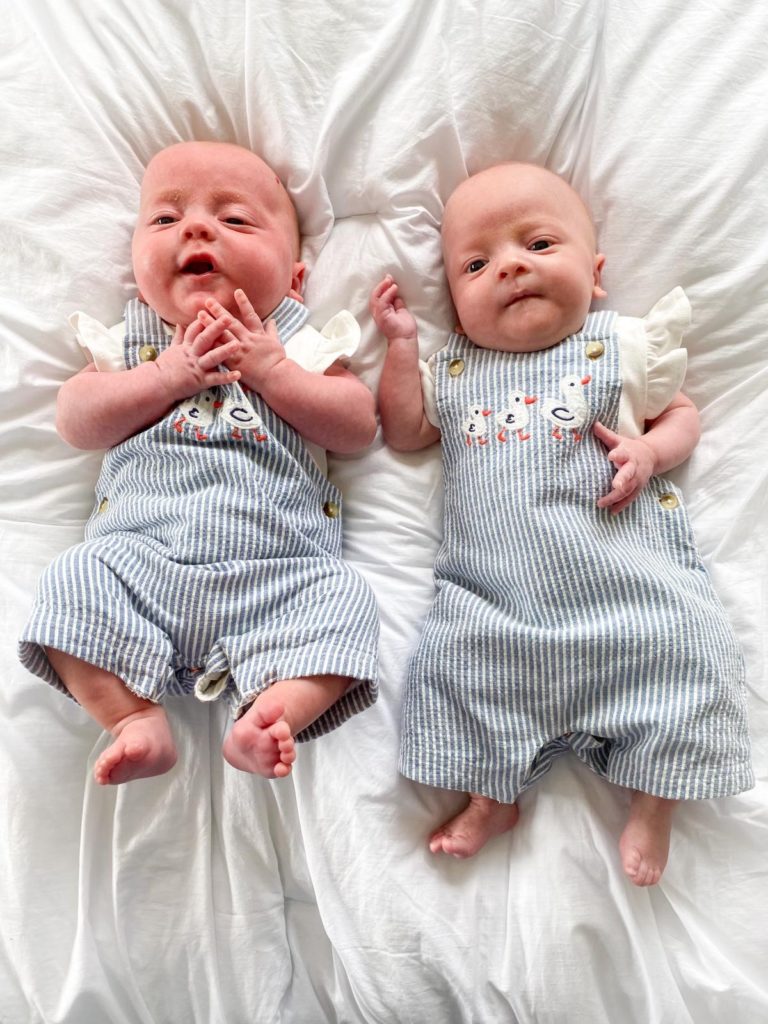 James, who weighed 3lbs, and his brother Freddie, who weighed 2lb 1oz, were born by Caesarean section on 26 March at Ipswich Hospital – three days after the national lockdown was announced.

They spent two weeks being cared for on Framlingham Neonatal Unit at Ipswich. They were then both transferred back to Colchester Hospital’s Neonatal Unit.

It was there that medical teams identified Freddie was having some bowel problems and he had to go to Addenbrooke’s for more specialist care for nearly two weeks.

This is not uncommon for babies who are born prematurely, but it meant the family were separated at an already difficult time.

Jane said it was a “tough time” for her and Alex as first time parents, but the app was a big help for them.

She said: “It was really good to have the app. The nurses would send photos overnight and although you know they would ring if something was wrong, it’s the added reassurance you get and it’s lovely to see a photo. Our family and friends enjoyed seeing them too.

“It was particularly good for us because there were a couple of days where we didn’t see either of them, so getting to see the photos of James and the updates was really nice.

“Everyone was so fantastic and looked after them both really well.”

Both babies are now doing well and keeping Jane and Alex, from Colchester, busy. 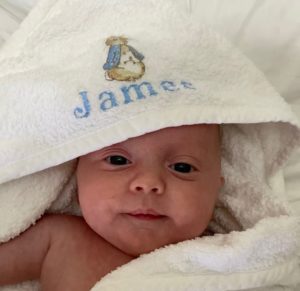 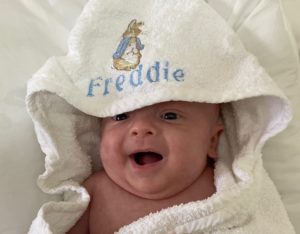 Offering extra support to parents when their babies are in hospital

ESNEFT’s neonatal unit teams have been using vCreate to record videos and take photos to send to parents when they have been unable to be in hospital.

It has helped to provide reassurance and reduce the separation anxiety some parents can feel when they cannot be with their baby. 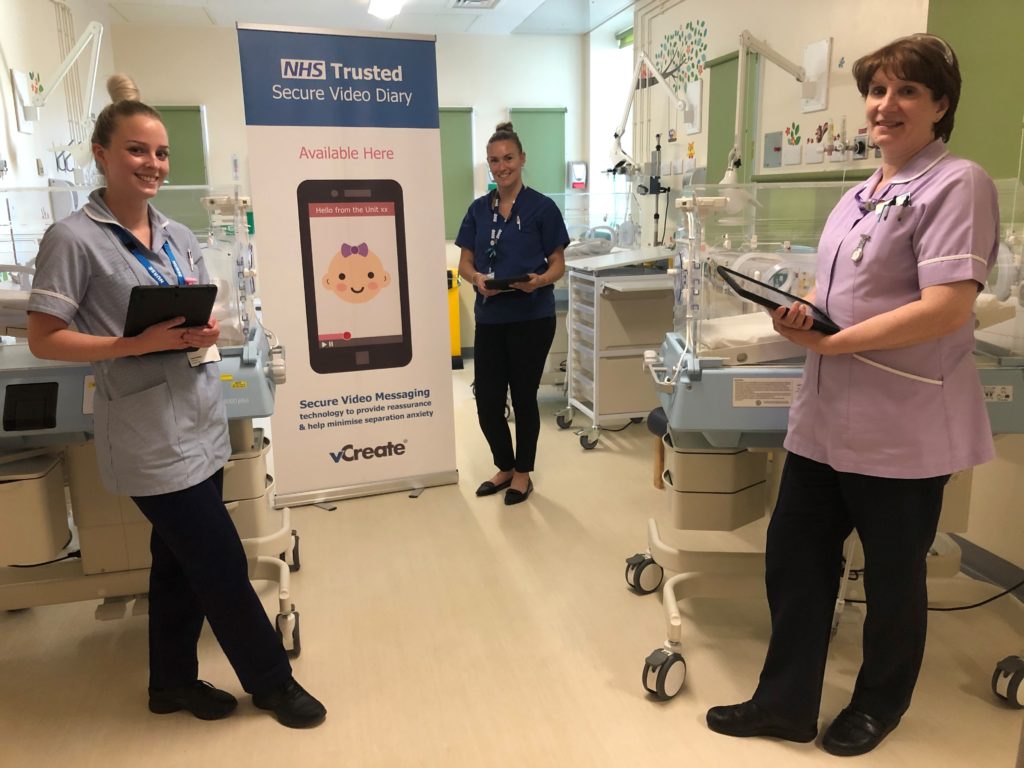 Neonatal ward clerk Tuesday Simpson helped to set up vCreate at Colchester Hospital and train the team on the Neonatal Unit.

She said: “Babies born at this time are going to be part of history, but this gives people hope and allows them to make memories as they can save the photos and videos we send them.

“I think it’s going to make such a difference, especially if mums have been poorly or if it’s not easy for mum or dad to come in.

“It’s more personal. Parents can contact us using the app so it almost works like texting and gives them reassurance when they are not here and is another way to keep them in the loop.”

The system is also up and running at Ipswich Hospital.

Clinical lead nurse on Framlingham Neonatal Unit Julia Cooper said: “Parents are over the moon. It’s the little things, like videos of their babies going to sleep at night, that they have really liked.

“We see a lot of parents who have to go home and can’t be here all the time, so it’s great we can send them messages about how their baby is getting on.

“It’s an incredibly simple system to use and it’s quick and easy too. Going forward I see it as a really positive thing for us.” 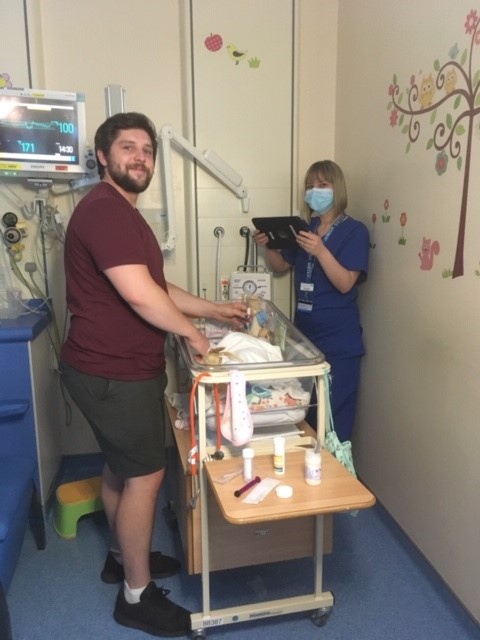 ESNEFT’s Chief Nurse Melissa Dowdeswell said: “So much positive work has been done across the Trust during the Coronavirus (COVID-19) outbreak.

“vCreate is a great example of something we have used to support families at this difficult time and we hope to continue using it in the future too.”

When a baby is admitted to the neonatal unit, parents are told about vCreate and if they wish to register they are asked to sign a consent form allowing the team to record videos and take photos of their baby.

Once that has been done they can then register for their own secure account. They can then receive updates from the team using an app and share them with their extended family too.

As soon as they are discharged, families can download the photos and video clips they have received to keep. For data security and privacy reasons the account is then permanently deleted.

vCreate can be used by neonatal unit staff and accessed by parents 24 hours a day, seven days a week.