Mum’s thanks for a decade of care

Home > Mum’s thanks for a decade of care

A grateful mum has thanked staff at Ipswich Hospital for the care and kindness they showed to her son throughout a decade of treatment for a rare form of epilepsy.

Sam Revitt, who died in February aged 10, was diagnosed with Dravet syndrome, a genetic condition which causes epilepsy and other developmental problems.

Together with parents Penny and Andrew, he became a familiar face on Bergholt Ward, to which he had open access so that his family could quickly receive care if any issues arose. Sam was also well-liked by the physiotherapy team, who provided him with extensive treatment for two years before his death.

Penny, who lives in Ipswich, has now thanked staff for their kindness and shared her experiences to help other parents whose children are unwell.

She said: “The staff gave our family 10 years of care and support to help Sam be as well as possible through his life. We had many admissions to Bergholt Ward over the years, and Sam was well cared for by a range of committed professionals and we built many good relationships. As he was recovering, Sam always had a cheeky smile for the nurses.

“Sam needed the support of a whole range of professionals and departments to meet his needs and manage his health while allowing him to be a happy, smiley boy. He liked nothing more that meeting lots of people, and hospital visits were real social outings.

“Andrew and I know that many of the staff went above and beyond for us, and we wanted to say thank you for their care during Sam’s life and after his death.” 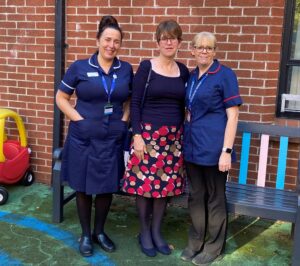 Carolyn McAskill (pictured on the right alongside Penny, centre, and ward manager Faye Button, left) is lead paediatric epilepsy specialist nurse at Ipswich Hospital. She said: “Sam was a character and always had time for a smile, especially for his favourite doctors and nurses. Together with his parents, he became part of our hospital family.

“As a team, we feel fortunate to have shared in the Revitt’s journey and although Sam was unable to speak, his smile was such that he brought a lot of joy to us all.

“Penny and Andrew have had a very difficult journey with the loss of Sam. Their continued strength and courage, especially in supporting Colchester & Ipswich Hospitals Charity and other services, is a credit to them and their beautiful boy.”

Sam’s family and friends have donated more than £850 to the Children’s Appeal, which the charity is spearheading to help pay for the department to be transformed into a modern, child-friendly environment with additional facilities for patients and staff.

For more information or to support the appeal, click here.