A 40-year NHS career is full of highs, lows and everything in between, but for Karen Moss, one of her most memorable moments was giving birth to a Christmas Day baby surrounded by her friends and colleagues.

The Neonatal Unit lead nurse and ward sister at Colchester Hospital has spent many Christmases at work, but in 1991 she wasn’t caring for tiny babies, she was having a baby herself – a story which was front page news at the time.

This festive season will be Karen’s last at Colchester Hospital. She retires from East Suffolk and North Essex NHS Foundation Trust (ESNEFT), which runs the hospital, on New Year’s Eve.

She said: “The whole of maternity and the Neonatal Unit knew I was in labour, but I found it so reassuring as I knew everyone was about. I didn’t deliver until 8.30pm at night though, so I kept them waiting.”

Karen and her daughter Hannah, who celebrates her 29th birthday tomorrow, made the front page of the Colchester Gazette, but the “embarrassment” of featuring so prominently in the paper with no make-up on is something she still remembers vividly. Her husband Robert forgot to bring her make-up bag into the hospital for her, but she also admits it’s “lovely” to look back on.

Karen also has a 25-year-old son, David, and lives on a small farm in Great Bromley with Robert. She grew up in Rowhedge, near Colchester, and not keen on life in the city, “country girl” Karen left home at the age of 18 to start her registered nurse training in 1980 at West Suffolk Hospital in Bury St Edmunds, rather than a London hospital.

Her mum was an Accident and Emergency sister at Essex County Hospital in the sixties, and later a health visitor, and it was her who inspired Karen to go into nursing.

“Her way of nursing is something I’ve not really changed from,” Karen said. “I was taught to treat people as I would like to be treated.” 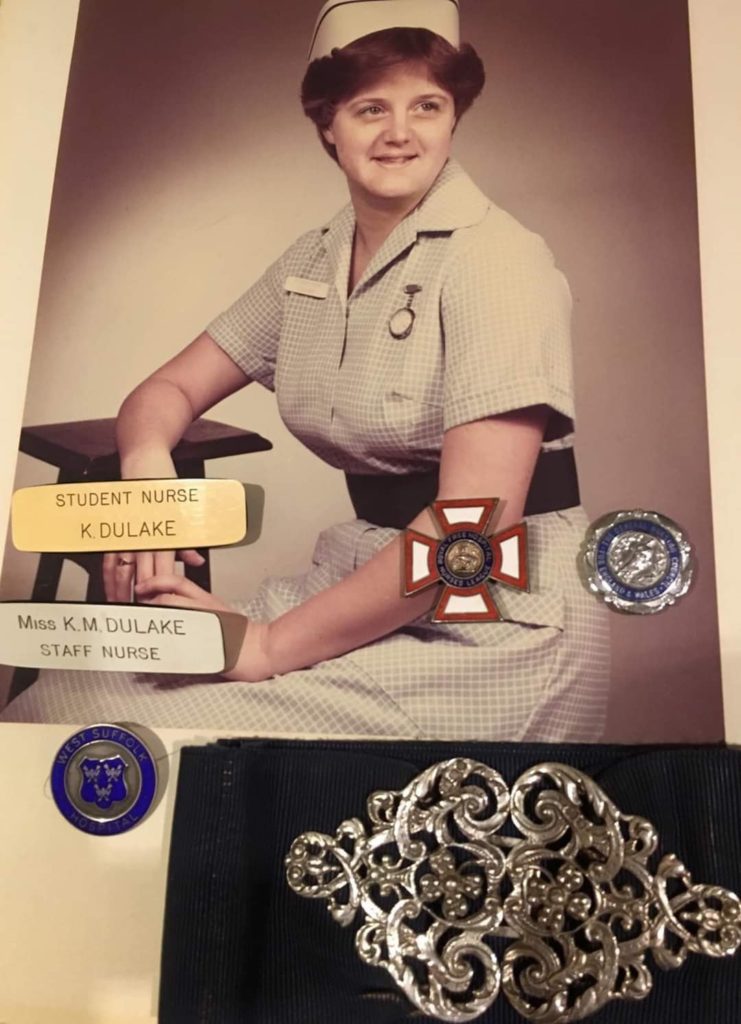 After successfully completing her nursing training, Karen joined Colchester Maternity Hospital in November 1984 as a student midwife and qualified in May 1986, becoming dual registered on the Nursing and Midwifery Council (NMC) register.

Karen went on to work at The Rosie (maternity) Hospital in Cambridge in August 1987 and undertook more specialist Neonatal training while she was there.

She said: “I found a niche that I absolutely loved. I really loved the care of these tiny babies and the support given to the families who were always so grateful for our help.”

After six months in Cambridge, Karen returned to Colchester Maternity Hospital in the spring of 1988 and took up a sister post aged 26. She has worked on the Neonatal Unit (formerly the Special Care Baby Unit) ever since and has been the unit manager since 2011.

Karen said: “I love helping parents whose babies are unwell, offering teaching, support and reassurance that their baby/babies will eventually get better and they can take them home.

“The care of these tiny babies requires attention to detail and precision nursing. This gives a great deal of job satisfaction at the end of a shift knowing the baby you have cared for has been fed, is clinically stable and well.”

Not content with a challenging and rewarding full time NHS career, Karen also helped pig farmer Robert run his business, Primrose Pork over the years. Before they sold it, Karen was a familiar face at local farmer’s markets and would help make their award winning sausages too.

She said: “I’ve always worked hard and had a strong work ethic. I was very hands on with the farm, but I wasn’t particularly good as I wasn’t as practical as Robert, but I would serve in the shop on my days off, sell at the farmers’ markets and make the sausages for the Christmas orders – it was exhausting and hard work, but you keep going and we have had a lovely life from it.”

Karen also worked through the foot and mouth disease and swine flu crises during the noughties, with the threat of “losing everything” on the farm hanging over her while she continued to juggle her busy role at the hospital.

Even though she has cared for thousands of babies and their families, Karen said there are “special” ones who stay in her mind and she still remains in contact with them now. She’s even started to look after the babies of babies she cared for.

“I recently cared for a baby whose mum I had nursed as a baby in my early career,” she said. “That really made me feel old.”

Karen has also seen many advances in technology, which have led to huge improvements in Neonatal care and more babies surviving when they otherwise may not have done. 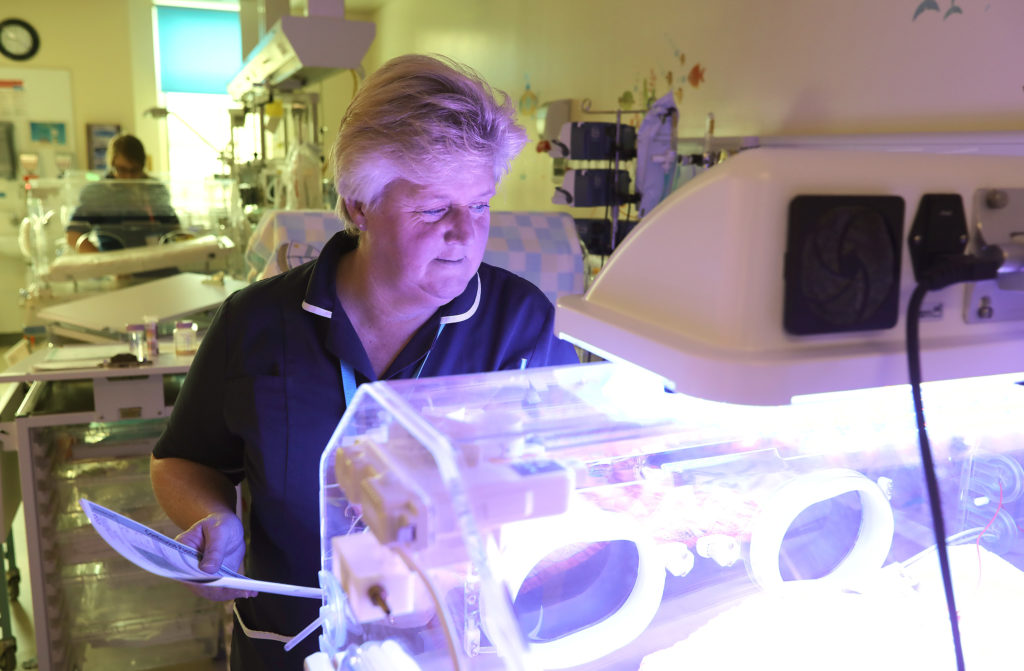 Karen said: “It’s all been for the better. Admitting very sick, preterm babies and twins or triplets is a huge feat that shows the team at their best. It’s a unique experience, from the skilled nurses caring for the baby, but also the nursery nurses who carry out all the support to allow this to happen. They continue to reassure parents and make sure the needs of the other babies are met.

“I’m so pleased to have been a part of that, knowing we deliver such a high standard of Neonatal care. It makes me so proud.

“I’ll miss all my colleagues, the teamwork and support of everyone. No one is individual. The Neonatal Unit, Children’s Services and Maternity, we’re a team.

“I have lived and breathed the Neonatal Unit and I will be very sad to leave, but I’m looking forward to seeing what else I can do.”

It was in the summer of this year that Karen decided to retire. There was never going to be a “right” time, but she also couldn’t have predicted what a year it was going to be as the Coronavirus (COVID-19) pandemic unfolded.

She said: “I am so proud of how the team has managed, and are still managing, Coronavirus (COVID-19).

“The sense of responsibility to protect my staff has been huge, but families too, knowing the effects of having a baby on the Neonatal Unit at any time, let alone during a pandemic.

“Having just one parent visiting at a time is not something we have done before. I found that quite hard, but we’ve stuck with it and we’ve done well to maintain open access. I’m proud of that.

“Parents have been so accommodating of us and grateful that at least one of them can come at any time of the day or night and they have supported us as a team.

“There have been so many changes every day that we’ve had to adapt to the Neonatal world.”

Karen also paid tribute to the families of NHS colleagues who have supported them through such an extraordinary year.

She added: “That’s the thing as a nurse, or anyone in the NHS really, it’s not just you. It’s the families who accept the hours, working over Christmas and when the phone rings in the middle of the night.”

Supporting nurses during their careers on the Neonatal Unit and beyond

Karen has been able to offer support and career development advice to hundreds of other Neonatal nurses over the years as a senior leadership nurse mentor.

She said: “I’ve really enjoyed developing young nurses and equipping them with the skills they need to provide excellent neonatal nursing care. The expert neonatal nurse can care for a baby and their family by teaching and giving good explanations so that the family are totally at ease leaving their precious baby in their care.

“When interviewing for nurses for my team I am always looking for a passion for Neonatal nursing and recognising young nurses who will flourish and bring so much to the already established team. I am very proud of today’s nursing team, but also of the nurses we have supported and they have taken their skills to other Neonatal units across the world.”

Karen and her husband Robert plan to do lots of travelling, both at home and abroad, when it is safe for them to fly and hit the road in their camper van.

She hopes to take up photography, as well as spend more time with her family. She also enjoys swimming, walking along seaside proms and there are many friends she’s looking forward to meeting up with.

Karen said: “I’ve never had time for interests, but I will come back and I will always be watching and supporting the unit. There are other areas of Neonatal care – there’s the voluntary and charity side of things – that I’d like to be involved in and I’ve lots of skills that I could take somewhere else, but I want to have a break first. I’ve got lots of plans.

“Whatever I do though it will always be with Neonatal care.”

One thing she won’t miss though is getting out of the farm gate at 6.20am to get into work for 7am, especially during the winter months.

“It will be so nice to go back to bed with a cuppa,” she said.