“If it wasn’t for them, I wouldn’t be here now”

A much-loved husband who was given just 48 hours to live after suffering a serious heart attack on Christmas Day has praised his care he received at Ipswich Hospital and the “exceptionally good” help he has been given since from a special patient support group. 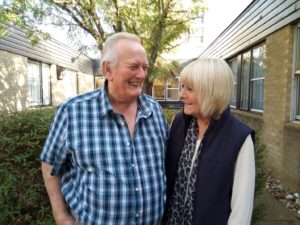 Ivan Spilling was rushed to intensive care in December 2017 after he suffered severe heart failure. Although end of life care was put in place, he defied the odds and began speaking again just hours later – much to the amazement of his wife Wendy, son Martin, daughter-in-law Teresa and his medical team, who described his recovery as a “Christmas miracle”.

Since then, Ivan has had a pacemaker fitted to regulate his heartbeat and has begun attending Ipswich Hospital’s cardiac rhythm management (CRM) support group, which meets every three months to offer help, advice and education to patients who have had a device fitted. He is now encouraging others to follow his lead and come to the next session, which takes place at the hospital next month.

“The care I’ve received has been fantastic – I couldn’t fault it in any way, shape or form,” said Ivan (77), who lives in Ipswich. “The team is absolutely brilliant and if it wasn’t for them, I wouldn’t be here now. I’m extremely thankful for what they have done for me.

“The support group is also exceptionally good. Every meeting has been really informative and they are always happy to answer questions. It also gives you the chance to speak to others in a similar situation.

“I would encourage anyone else who has a pacemaker to go along. I think people get nervous and concerned when they are told they need a pacemaker as they don’t know how it will impact on them. Coming to the group will help dispel those myths by giving you all the information you need. It’s well worth it and I would recommend it to anyone.”

Around 40 patients now attend the CRM group, which has been running for a year. It gives them the chance to share their experiences, ask questions and offer mutual support in a relaxed and friendly environment, as well as listen to expert speakers such as specialist nurses, physiologists and pacemaker technicians.

“The support group has quadrupled in size since it launched, and the feedback we’ve received has been excellent,” said Nicola. “Patients are really grateful to have the opportunity to listen to our experts and chat to others, and are always keen to come back to future sessions.

“We would encourage anyone who has a device fitted to come to our next meeting and find out more about living well with a pacemaker.”

The group’s next meeting takes place on 2 December. For more information, visit www.esneft.nhs.uk and search for CRM.