Naomi’s sepsis story: ‘I deteriorated so quickly – it was very scary’

A holiday-maker who nearly lost her life to sepsis has shared her story to help raise awareness so that other people experiencing similar symptoms can get fast medical help.

Naomi Aldous was in Lanzarote with husband John and two friends when she became very unwell with stomach pain, weakness and vomiting and diarrhoea.

Suspecting she had a bug, Naomi decided to try and sleep it off. Fortunately, her husband and friends realised just how unwell she had become and were able to get her the emergency medical help she needed.

Naomi woke up 19 days later in a Spanish intensive care unit, where she had been receiving treatment for septic shock, multiple organ failure and pneumonia.

“I deteriorated so quickly – my skin had turned grey, I couldn’t stand up straight and I wasn’t making much sense when I spoke,” said Naomi, who fell ill in February 2020. “I had no idea that I was so ill, but it was very scary for my husband and friends.

“I was in intensive care for nearly four weeks and was so unwell that the medics considered switching off the machines at one point. I was incredibly confused when I came round and found speaking very difficult, while I had also terrible nightmares. It was very traumatic.” 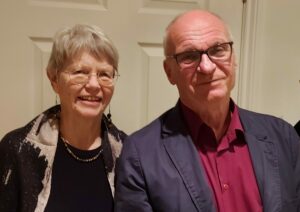 Naomi, who lives in Martlesham Heath, was airlifted back to the UK and spent a further three weeks at Ipswich Hospital, which is run by East Suffolk and North Essex NHS Foundation Trust. Doctors later discovered that she had been born with a blockage in her kidney which had become severely infected, in turn leading to sepsis.

“Without doubt, my husband, our friends and the hospitals saved my life. They saw how rapidly I deteriorated and knew it was something very serious,” added Naomi.

“Trying to get better has been hard and I am still not fully recovered. But I am so grateful for the help I received and hope that I can now raise awareness among others.”

Sepsis happens when the immune system overreacts to an infection or injury. Although it can cause death, it can be successfully treated with antibiotics if it is diagnosed early.

Symptoms to look out for in adults include:

In children, symptoms include fast breathing, convulsions, looking mottled, bluish or pale, being very lethargic and having a rash which does not fade when pressed.