Sugar Baby Love by the Rubettes was at number and was a regular on the turntables as John Alborough began his love affair with hospital radio on 16 May, 1974.

Over 2,000 shows later, ‘Alborough Festival’ remains a popular feature with the patients at Ipswich Hospital – John broadcasting his programme once a week from the studios at the north end of the building.

Musical tastes may have changed over the years, technology has advanced, and vinyl disappeared only to make a triumphant comeback.

One thing hasn’t altered though and that is John’s commitment to hospital radio, whether on air or on the hospital’s various wards collecting requests.

John, who is also the current hospital radio chairman, said: “We are there for the patients, we are there to chat with them (on the wards and on the airwaves) and if they request a song then that is a bonus.

“A lot of patients like it when we visit them (in hospital) and they like to hear their requests played on the radio. But it doesn’t matter if they are not listeners or do not want to request a song. The main thing is that we are there for them.

“On air. I imagine that I am broadcasting to just one person and I picture that person in my mind. I am giving them all my attention.”

The station boasts more than 100,000 songs, sung by more than 12,000 artists so there is always plenty of variety for patients and the presenters. 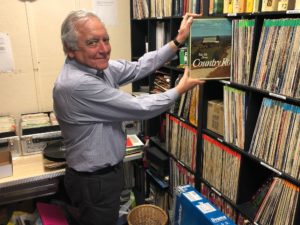 From R&B to country, classical to hip-hop, ask for a track and John and the team are more than likely to have it. However, there are some songs and artists that are more popular than others.

John, who is also an ESNEFT governor, said: “When we ask for requests, people often say ‘You would not like it’, but they take priority. One minute you might be playing a country and western track before moving on to playing some AC-DC.

“There are certainly some artists who are more popular than others. Jim Reeves, Elvis Presley and Frank Sinatra are amongst the most requested, while the ‘Crystal Chandelier’ was very popular in the 1970s when there were large American communities from the US Airforce at Bentwaters and Woodbridge. That is also requested in some of the other requests we have received over the years.”

Since starting his career, John has received thousands of calls for songs, but one request has stuck in his mind. 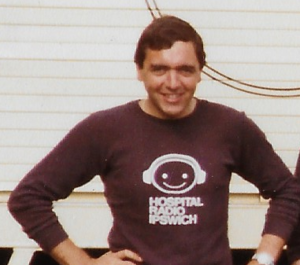 John Alborough in the late 1970s

“A lady once asked for a song that I had never heard of by an artist I didn’t know,” said John.

“Amazingly I found it on vinyl and after playing it a colleague from hospital radio went on the ward where the lady was and she was talking with her family about the song being played on radio and the fact that her name had been mentioned.

“The satisfaction you get from cheering a patient up or distracting them from worrying about their pain is priceless.

“People usually have a very precious piece of music and to play that for someone who might be very ill; you can’t put a price on that.”

John’s top three songs: ‘Just my imagination’ by the Temptations, Eva Cassidy’s ‘Fields of Gold’ and ‘Wind beneath my wings’ sang by Lee Greenwood. 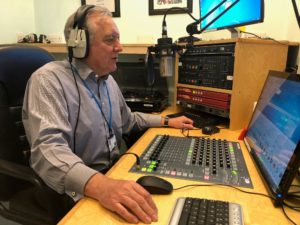