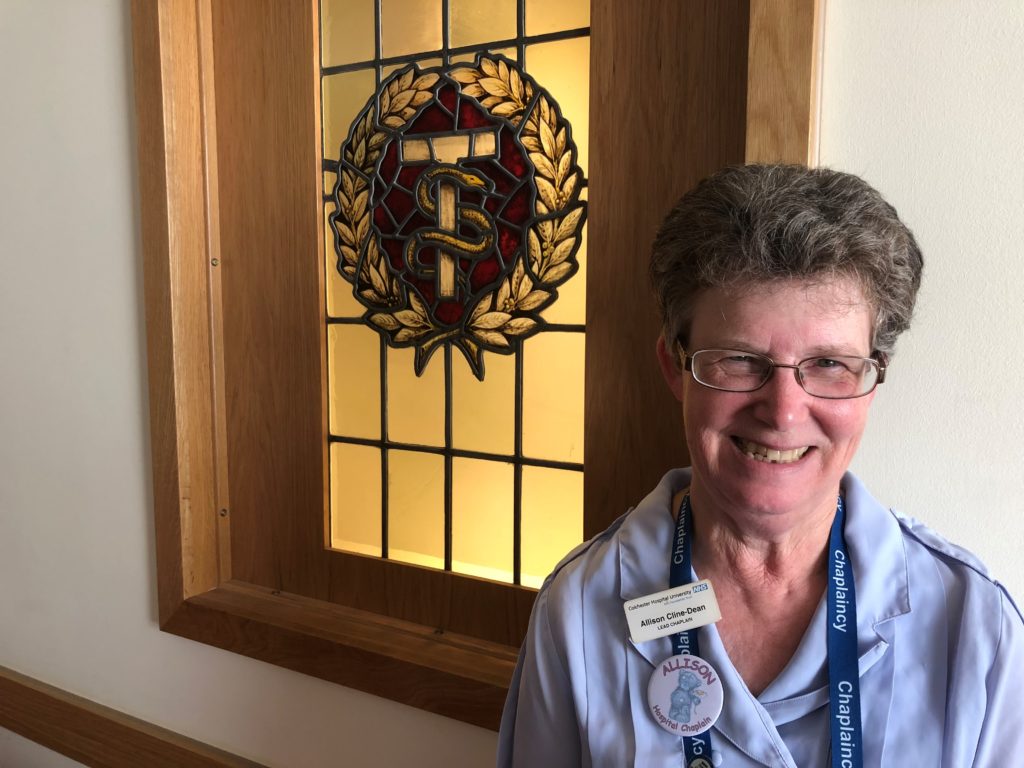 It’s not just about religion, and we’re not just here for the dying

That is the message from the East Suffolk and North Essex Foundation Trust’s Lead Chaplain Allison Cline-Dean during Healthcare Chaplains’ Week.

The Trust’s chaplaincy team are on hand to support the whole hospital community, whether it is organising an emergency wedding, reassuring a nervous patient before surgery, listening to someone’s concerns about their care or lending an ear to a colleague, they are here to do so much more than you think.

The team, who are based across Colchester and Ipswich hospitals and the Trust’s seven community sites, includes five chaplains, as well as more than 30 chaplaincy volunteers who are the “eyes and ears on the wards”.

The chaplains aren’t just there to support patients though, they are also here for staff and to help them through challenging times, both at home and in the hospital.

I have seen staff who are feeling overwhelmed, some have difficult things going on at home so it’s about being there for them, giving them the opportunity to talk about their concerns.

It allows staff to go back to work in a better frame of mind feeling able to cope and they are not alone.

Allison and her team also make sure dying patients’ final wishes are honoured and staff meet a patient’s religious needs while they are in hospital.

Part of the patient’s care is to ensure their spiritual needs are met, that’s just as crucial as them having the right medication and therapies, the spirit is an integral part of everyone.

‘We care for people’s spirit’

Former legal assistant Allison, who joined Colchester Hospital in January 2016 and became Lead Chaplain at the end of June, said a common misconception about chaplains is people believe they are all vicars, which is not the case. Allison is not, and she is not ordained.

We care for people’s spirit. Not everyone is religious, but all religious care is spiritual. We’re here for all faiths and beliefs.

Patients may or may not reveal what’s happening or their concerns – they may have had difficult news, some may have complained about their care they have received, or it may be something minor like the lights are kept on a night – but it’s about finding out what keeps them going, what gives them hope.

For some patients it’s about knowing they have voiced their concerns and someone has listened. I may not have solutions, but I can provide reassurance.