The pungent smell of burning petrol mixed with the extreme noise of racing cars tearing round the track is an experience many love to watch. But imagine you’re the lead doctor racing alongside in another Formula One ready to jump into action should there be a crash.

That’s the reality for hospital consultant Dr Paul Carroll who spends his spare time leading the medical team at the Silverstone racetrack.

Paul, who is the trauma and clinical lead while part of the Formula One team, was the first on the scene when Max Verstappen crashed in the July British Grand Prix, and it’s his job to be there to treat anyone injured during race days.

Paul, who works as an intensive care consultant at Ipswich Hospital, says his passion is sport, so being able to combine his day job along with his love for watching fast cars is a privilege.

“If you’re going to do something – make it your passion!”

Paul, who has worked for at Ipswich Hospital since 1998, has also travelled to other countries, including Abu Dhabi, as part of the Formula One medical team.

He said: “My role is to look after anyone injured – as well as being there for the drivers. We have a lot of mechanics who get their feet run over in the pit stops! I’m also on hand to treat or assess members of the public too.

“It’s a big responsibility but it’s a really enjoyable thing to do too.”

Paul was seen on TV aiding Max Verstappen during the Silverstone crash in July. In his role as a medic, he had to make immediate assessments about Max’s condition and whether he could continue in the race or needed urgent treatment. 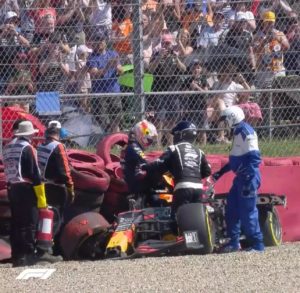 Paul said: “You get data about all the drivers in the actual medical car and you also get a reading on the strength of any impact. When you get to the car, your immediate responsibility is to check if there is any life threatening issues with the driver.

“There’s also a time and safety factor due to the risk of fire or electrocution from the hybrid batteries – at that time there was concern that the car was ‘live’.”

Paul said once drivers are out of the car they are taken to the medical centre where a team of doctors carry out a further more detailed assessment, and whether the driver needs to be moved to a trauma centre or can stay and be observed by the clinical team.

He added: “The bizarre aspect is you are practising medicine in front of the scrutiny of a loud crowd of thousands and thousands of people – 1 billion television viewers – at the time you forget this and zone in on your priority – the driver’s medical state and the risk of fire or electrocution.”

Paul said the medical teams are divided each year between medical centre, car or more managerial positions to allow for some COVID-19 resilience in the the team make up.

“This year I was in the medical car which meant I avoided assisting in the drug testing of the drivers, which, like any elite sport does occur at the end of the race even in Formula 1.” He added.

Paul said aside from treating Ipswich patients, it’s another part of being a doctor he really enjoys.