A former breast cancer patient has backed Colchester & Ipswich Hospitals Charity’s appeal to raise the final £1.2m needed to build a state-of-the-art centre which will transform the experience which patients have when receiving care.

Kirstie Boxall undertook an intense course of chemotherapy, as well as having several operations at both Ipswich and Colchester hospitals, after being diagnosed with a rare form of cancer in 2017.

Now in remission, she has lent her support to the Blossom Appeal, which is aiming to raise the final £1.2m needed to build a new £5.3m breast care centre at Ipswich Hospital.

“My treatment was pretty intense and I found it exhausting, but I had my faith in the team who were all wonderful and so supportive,” said Kirstie, who swam the length of the English Channel in a local pool in 2019 to raise more than £3,000 for the appeal.

“It’s amazing how the team operate in such a disjointed treatment area. It can also be pretty stressful from a patient’s point of view as currently you have to walk across the hospital for one thing and then back to the other side for another. Having one centre for all the care and treatment would make it so much easier for patients and alleviate a huge amount of anxiety they have when they walk through the door.

“A garden space would also be great, as would a private area. It would make what isn’t a great experience just that bit nicer and more bearable.” 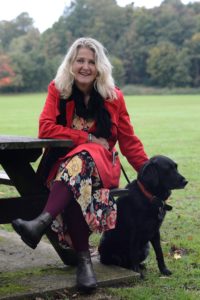 Kirstie has spoken in support of the Blossom Appeal during Breast Cancer Awareness Month, which runs throughout October. Her words also come shortly after East Suffolk and North Essex NHS Foundation Trust (ESNEFT), which runs the hospital, submitted a detailed planning application for the new centre to the council.

If approved, the centre will bring all elements of breast care – including the clinic, imaging department and breast screening – under one roof for the first time. This means patients will no longer need to walk backwards and forwards between the departments as they do now, often needing to get dressed and undressed again and spending longer in waiting rooms.

Patients, carers and the public are now being invited to share their views on the look and feel of a new breast care centre by filling in a short survey, which is available by clicking here. The survey will run until 30 November.

Anyone who would like to support the Blossom Appeal, which was launched three years ago today, can click here.

The breast care centre is one of a number of building developments planned for Ipswich Hospital. Plans are also underway to build a new urgent treatment centre and emergency department, as well as a new children’s unit will be built.