Pregnant women and people, together with their partners, can now receive tailored support to help them stop smoking following the launch of new service designed to make it as easy as possible to quit.

They will be contacted by a smoking cessation midwife within five working days of their booking appointment to discuss their options. During their pregnancy, they will receive up to 10 home visits from smokefree midwifery support workers, who will offer advice on quitting, as well as help to develop healthy habits such as good sleep and nutrition.

The project has been funded by NHS Suffolk and North East Essex Integrated Care Board (ICB). It has also received support from Essex County Council, which is funding the nicotine replacement therapy and vapes, which can be safely used during pregnancy.

Clare Bailey (pictured with Chelsea Warner, who gave up smoking 18 months ago), an ESNEFT smoking cessation midwife based at Colchester Hospital, said: “We are incredibly excited about this project, which will see a dedicated smokefree team offer specific support to help pregnant people and their partners to stub it out for good.

“Quitting can be really difficult, especially if someone you live with is continuing to smoke. By offering support to the whole household, we hope that we can make stopping that little bit easier for everyone.” 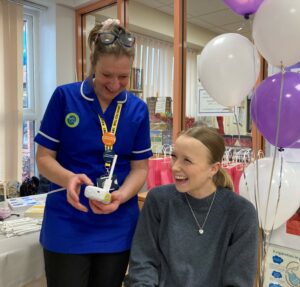 Thanks to support from ESNEFT, Danielle Maddern gave up smoking alongside partner Phil when she was three months pregnant with son Freddie, who is now six weeks old. She has stayed smokefree ever since – and is now encouraging others to follow her lead.

“The support I received made such a difference,” said Danielle. “Clare explained all of the options which were available and Phil and I picked up free vapes the following day. We haven’t smoked since and feel better for it.

“Clare called several times while we were quitting to check how we were getting on and offer us advice. Its not easy to quit smoking and speaking to someone who understood how hard it can be made a massive difference.

“I would encourage anyone else who is offered support from the service to go for it.”

Sandra Gosling, maternity quality and safety assurance lead for the Local Maternity and Neonatal System, which is part of the ICB, said: “Smoking during pregnancy can lead to serious complications such as low birth weight, childhood health problems and even stillbirth and miscarriage. But quitting isn’t easy, which is exactly why this critical intervention has been put in place.

“This new service is designed to bring long term health benefits by supporting people not just through pregnancy, but for six weeks after their baby’s birth. This will give them the best possible chance of staying quit for good.” 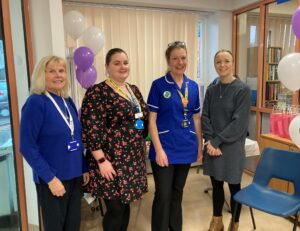 The service will be rolled out at Ipswich Hospital early next year once recruitment to the smoking cessation team is complete.