Courageous cyclists have raised nearly £6,500 for Colchester & Ipswich Hospitals Charity by completing a gruelling 500-mile tour of the Scottish coastline.

The 10-strong team from the 3rd Battalion Parachute Regiment, based at Merville Barracks in Colchester, arranged the fundraiser to thank Ipswich Hospital for the care they gave to one of the soldier’s daughters after she was involved in a horse riding accident. 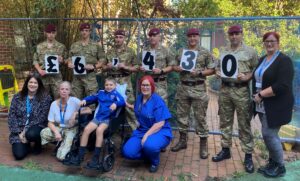 All of the money they raised will be used to support The Children’s Appeal, which is helping to pay for a complete transformation of the ward to improve its facilities and create a modern, child-friendly environment fit for the 21st century.

The ride was held over five days at the start of September, and took the team from Inverness Castle in the Highlands to the tip of John O’Groats and back, featuring a staggering 10,363 meters of ascent.

Sgt Brad Clements, one of the cyclists who helped to organise the ride, described the route as “testing”, and said the weather conditions had brought even greater challenges.

“The North Coast 500 is a really testing event – it’s one of the biggest British tourism attractions for cyclists, so everyone who is into camping and cycling knows about it,” he said.

“The Scottish weather was pretty horrendous. The first day was the best day, but after that there were times when we were pedalling against 25 mile per hour crosswinds.

“We wanted to raise funds for the unit to give something back after they cared for the daughter of one of our colleagues, and think it’s a really incredible cause.” 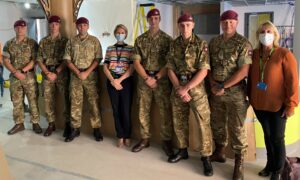 To support the team’s efforts, visit www.justgiving.com and search for “3 Para C Company”.

For more information about The Children’s Appeal, click here.