When Patrick Murray’s surgeon said his cancer operation could be carried out by a robot, it sounded like something from a sci-fi film.

But the grandfather-of-five (and soon to be great-grandfather) was more than happy for the cancer team at East Suffolk and North East Essex NHS Foundation Trust to use the robot to remove the tumour that had grown in his colon.

Patrick, who lives in Brightlingsea, said he’d had blood in his poo – a symptom of bowel cancer – during the last six months, and although an initial sample didn’t confirm the diagnosis, further investigations did. 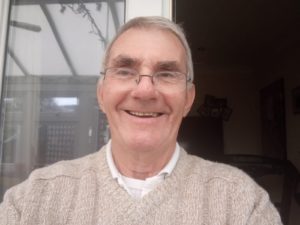 Patrick Murray at home in Brightlingsea

Having met with the cancer team at Colchester Hospital, Trust Cancer Lead Clinician Subash Vasudevan, said he could perform the operation to remove a section of Patrick’s bowel using the state-of-the-art Davinci Xi surgical robot – and Mr Murray was more than happy to go ahead.

Patrick added: “I was very happy to have the operation using the robot! I was given the choice and thought it was amazing and feel so privileged to have the opportunity.”

Patrick is only one of a handful of patients to have been operated on at one of the Trust’s hospitals using the technology, and only needed to stay in hospital for a total of three days as the operation isn’t as invasive, with four incisions made, like keyhole surgery.

The 81-year-old said: “My recovery has been remarkable – I was walking on day one, climbing stairs on day two and now two weeks later I’m walking an hour a day. I’m still a bit tired but think that’s to be expected.” 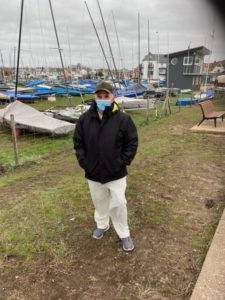 Patrick following surgery, on a walk

The robot is controlled by the surgeon, and in Patrick’s case, it was Mr Vasudevan who sits in the same room as the patient, looking through the eye piece of the machine at a console, and controlling the four arms of the robot to move tissue or make cuts where necessary.

Mr Vasudevan said he prefers to use the robot as it offers such a benefit during surgery: “The vision of the robot is amazing – it’s an incredible help when performing a long and difficult operation. You can see so much more as it magnifies areas, such as nerves, and means you can be even more precise. It’s also incredibly stable, so makes complex surgery easier and means the surgeon is less tired after a long operation.

Currently the robot is being used for colorectal procedures. Gynaecological and urological procedures will soon be following. 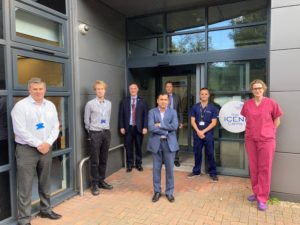 The £2.5m robot is being used by the surgical teams at ESNEFT, with initial support and training facilitated by the team at the ICENI Centre at Colchester Hospital.

Mr Vasudevan, who also chairs the robotics steering group, said “This is a real team effort from the business case to the first patient being operated on. This has certainly boosted the morale of all staff involved and has shown ESNEFTs commitment to innovation even during these difficult times.”

Dr Angela Tillett, Chief Medical Officer at ESNEFT, added: “We’re delighted to be able to offer robotic surgery as part of a new service to patients with many conditions including bowel surgery, as well as urological and gynaecology surgery.”