Patients can be seen quicker and closer to home thanks to a new procedure that’s come to Ipswich Hospital’s Cardiology department for the first time.

David Bloore, Cardiology lead at Ipswich, said patients were previously sent to Papworth Hospital in Cambridge or the Cardiothoracic Centre in Basildon for the treatment. He said:

“It’s not a new technique, but it is new to us. We are able to modify the narrowing of the artery with a diamond tip burr called a rotablator. It breaks the calcium in the wall of the artery in to microscopic fragments.”

Dr Bloore said two patients have already had the procedure at Ipswich. They remain awake throughout – it is carried out using a small plastic tube in the wrist – before they undergo stent or surgical treatment.

He said: “Being able to deliver it in-house reduces the waiting time and travelling times for our patients.

“People who would otherwise have to go to Papworth or Basildon can be treated closer to home and months sooner.”

The first person to have rotablation at Ipswich Hospital was Teresa Lewins, 76, from Felixstowe. 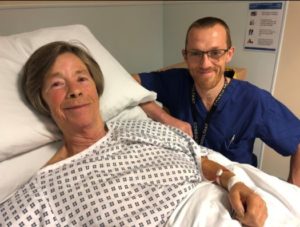 She’s looking forward to getting back to rock ‘n’ roll dancing and her usually active lifestyle after having the procedure done twice with Dr Bloore.

On the second occasion she also had a stent fitted. It was all done in about an hour and she was able to go home on the same day to a new lease of life.

She said: “I think it’s brilliant. All the way through it’s been super, I was amazed how quick the whole process has been.

“I’ve really missed the dancing, and I couldn’t walk or swim because I got out of my breath and my arms ached, but now things will go back to how they were.”

Dr Bloore said: “It’s a great result and a result which we would not be able to achieve without this piece of equipment and technique.”

Calcification within the coronary arteries refers to the build-up of calcium within the wall of the artery. It is a bit like limescale accumulating in your pipes at home

If associated with a severe narrowing it can be difficult to treat with angioplasty and stents, which is where rotablation comes in.

Calcification is caused by the chronic inflammatory nature of coronary artery disease, and is more common as you get older and in people with diabetes.