A Suffolk artist inspired to paint a portrait of an NHS ‘hero’ has chosen one of the physiotherapists based at Ipswich Hospital.

The portrait is part of a project to say thanks to NHS key workers through the pandemic.

Artist Charlotte Johnstone chose to paint the portrait of Jemima Roberts, a rotational physiotherapist based at Ipswich Hospital – and Jemima is overwhelmed by the result. 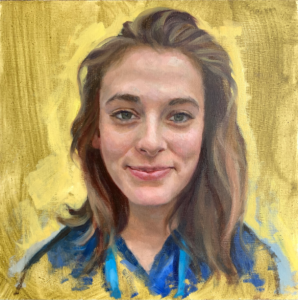 The portrait Charlotte painted of Jemima

Jemima, who has been involved in working with patients who need chest care, treatment and rehabilitation, said: “I think it’s incredibly life like. When I compare it to the photograph it looks like a photocopy!

“It is a bit strange to look at a portrait of yourself at first, but Charlotte is incredibly talented.

“My role has been very interesting and at times incredibly emotional, some of the highs and lows, especially on critical care, have been enormous. To be newly qualified and thrown into the middle of a global pandemic is quite something! Even though it has been the toughest and most exhausting time of my life, I can say with no hesitation it has also been the most rewarding time of my life.”

The portrait project is part of a global call to action by an artist called Tom Croft, who pledged to paint an NHS key worker in lockdown. He also encouraged other artists to do the same. His plea was answered by hundreds of other artists, and so many paintings, sculptures, drawings and pieces of artwork were created many have been compiled into a book called ‘Portraits for NHS Heroes’. 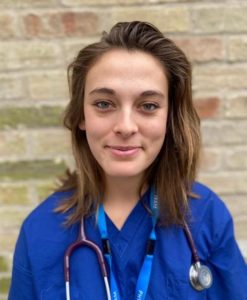 The original photo of Jemima

Charlotte wanted to contribute to the original call for artists to choose a hero through #portraitsfornhsheroes, so chose Jemima as her muse after being put in touch through a mutual acquaintance.

Charlotte, who comes from a family of artists, has been painting for 20 years.

She said: “I got involved in this project because I felt a horrible sense of inertia and paralysis at doing nothing during lockdown, so when Tom Croft called for artists to highlight the work of our critical workers, I felt it was something I could properly do!

“It’s also been a wonderful exercise in capturing the faces of people behind the scenes and something of their joyous energy, so keeping it loose, fresh and painterly, which is the way I love to work.”