A consultant surgeon at East Suffolk and North Essex NHS Foundation Trust (ESNEFT) has been presented with a prestigious national award in recognition of the contribution he has made to advancing medical practice of the ear, nose and throat (ENT). 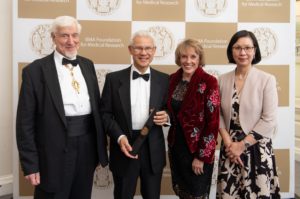 Matthew Yung, who is based at Ipswich Hospital, was awarded the Walter Jobson Horne Prize from the British Medical Association (BMA) during a ceremony in London. He was given the accolade in recognition of the role he has played internationally to advance the science and practice of laryngology, rhinology and otology – more commonly known as ENT.

Mr Yung’s achievements include developing a pioneering audit system for ear diseases, which is now used by surgeons from 27 countries to compare and measure patient outcomes, share best practice and improve care. In addition, he introduced the classification system of certain ear diseases which is now accepted internationally.

Mr Yung has also held the platinum clinical excellence award – one of the NHS’s highest accolades which is only awarded to around 1% of all doctors – since 2011. In addition, he has helped educate and train hundreds of other ENT surgeons after organising more than 100 surgical courses and supervising numerous PhD students.

“The award ceremony was a memorable occasion for me, with representatives from different colleges and members of the House of Lords,” said Mr Yung, who has been a consultant in Ipswich since 1988. “It was wonderful to be amongst so many distinguished people in their respective fields.

“I view this national award as a reflection of the workforce at Ipswich Hospital, which is where I developed my surgical skill and scientific mind. The hospital has given me the opportunity to influence laryngology, rhinology and otology on the international stage, for which I am very grateful.

“I hope that this award will encourage younger doctors and show that if you are motivated and have a good team and good material around you, you can do good work and be an opinion leader, whichever hospital you serve.”