A specialist midwife with East Suffolk and North Essex NHS Foundation Trust (ESNEFT) has received a major national award in recognition of the support she provides to parents who have lost babies.

Ali Brett, who is based at Ipswich Hospital, won the Archie award at a ceremony held by the Mariposa Trust in London at the start of October. The award recognises excellence in care and support for those who have lost babies and is named after TV soap actress Kym Marsh’s son, who sadly passed away during pregnancy.

And although Ali was on holiday when the winners were announced, she was thrilled that her daughter Amber and three volunteers from Ipswich Hospital’s Baby Bereavement Group could attend the ceremony on her behalf and video call her as her name was read out.

“It was very humbling and a great honour to be nominated, and absolutely amazing to win,” said Ali. “Amber and the group members kept me updated with what was happening during the evening and it was really special to hear my name announced.

“The award may have my name on it, but it represents our fantastic work family, who continuously provide safe and compassionate maternity care every day and night. It is also recognition of the dedication that our amazing volunteers show to the Baby Bereavement Group. They are just incredible.”

Ali was also nominated in the bereavement midwife category. 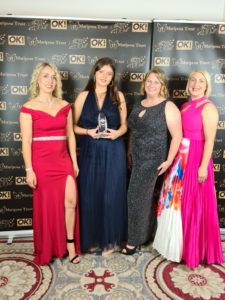