A grateful patient has shared his thanks to teams at East Suffolk and North Essex NHS Foundation Trust, and the NHS as a whole, after he received a speedy diagnosis for a potentially life-threatening condition during the Coronavirus (COVID-19) pandemic.

Edmund Crosthwaite, 30, said he was “lucky” to have been diagnosed with an internal carotid artery dissection before he experienced any long term damage.

This is where a small tear forms in the inner lining of the artery wall which supplies blood to the head and brain.

Internal carotid artery dissections are the most common cause of strokes in young adults.

Thanks to Ipswich Hospital teams and efforts of others across the NHS, Edmund’s condition was identified early and before the onset of stroke.

He said: “I couldn’t fault it. Ophthalmology, Brantham and Capel wards and everyone who saw me were all brilliant.

“Even with all the extra restrictions and precautions in place due to the pandemic, it always felt like everyone was doing all they could to reassure me and care for me too.

“They saw me quickly, even before we found out the seriousness of my condition, and they answered all of my questions. Everything you could want from the NHS.”

After suffering with a headache and neck pain earlier this month, Edmund called NHS 111 after his pupils also became uneven. 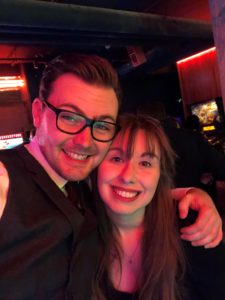 Initially he had a video consultation and was then seen face-to-face at an eye clinic in Ipswich. From there he was referred to the Ophthalmology team at Ipswich Hospital.

When he arrived he received a further eye examination, blood tests and a CT scan and was then told he could go home in preparation for a follow up appointment.

However, after arriving back at home in Stowmarket, where he lives with his fiancée Janie, Edmund received a call to say he needed to be seen immediately.

It was after his scan results were received that the team realised Edmund’s case was an emergency. Following visits from other consultants, specialists and conversations with a team at Addenbrooke’s hospital in Cambridge, he had a further MRI scan before being allowed to go home on 17 June. His symptoms first began on 12 June.

Edmund added: “Everything seemed to work so smoothly for me, right from the start.

“From the call to NHS 111, through to the community eye clinic (eCare Medical Eye Centre) in Ipswich which first referred me, to all the treatment I received at the hospital.

“It didn’t feel like the pandemic was affecting anything at all, although I’m sure it’s a lot harder for everyone.”