One patient’s journey from kidney dialysis to transplant

Today he has thanked the Renal Unit team at Colchester Hospital for their care and support throughout his journey from kidney dialysis to transplant.

On 19 March last year at 2am, the 52-year-old was told a donor had been found and after spending more than two years on dialysis, plans were under way for him to have the kidney transplant he had been waiting for. 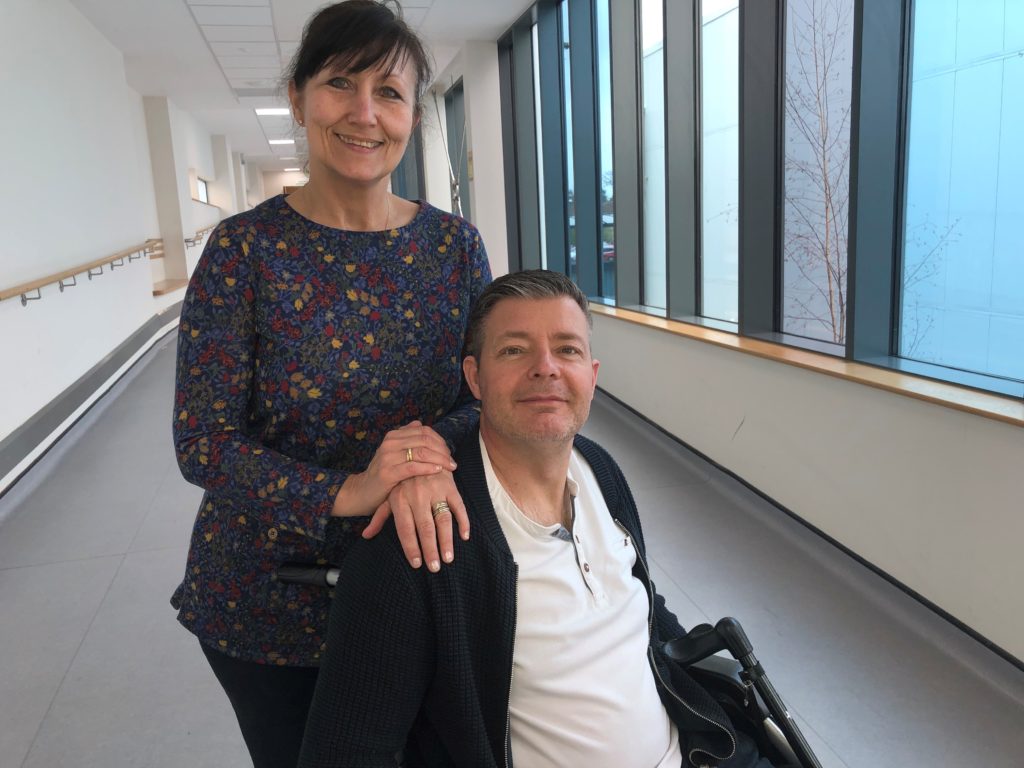 He and his wife Donna, from Colchester, made their way to Addenbrooke’s Hospital in Cambridge and 22 hours later he had the life-changing operation.

Nick said: “I was buzzing, we were smiling and laughing and couldn’t stop the happiness we felt.”

That moment of pure joy was also tinged with sadness though.

Donna said: “It creeps in that someone has lost their life and you’re aware the whole time someone else had passed in order to allow my husband to live. That’s the tragedy in all this and it brings you down to earth.” 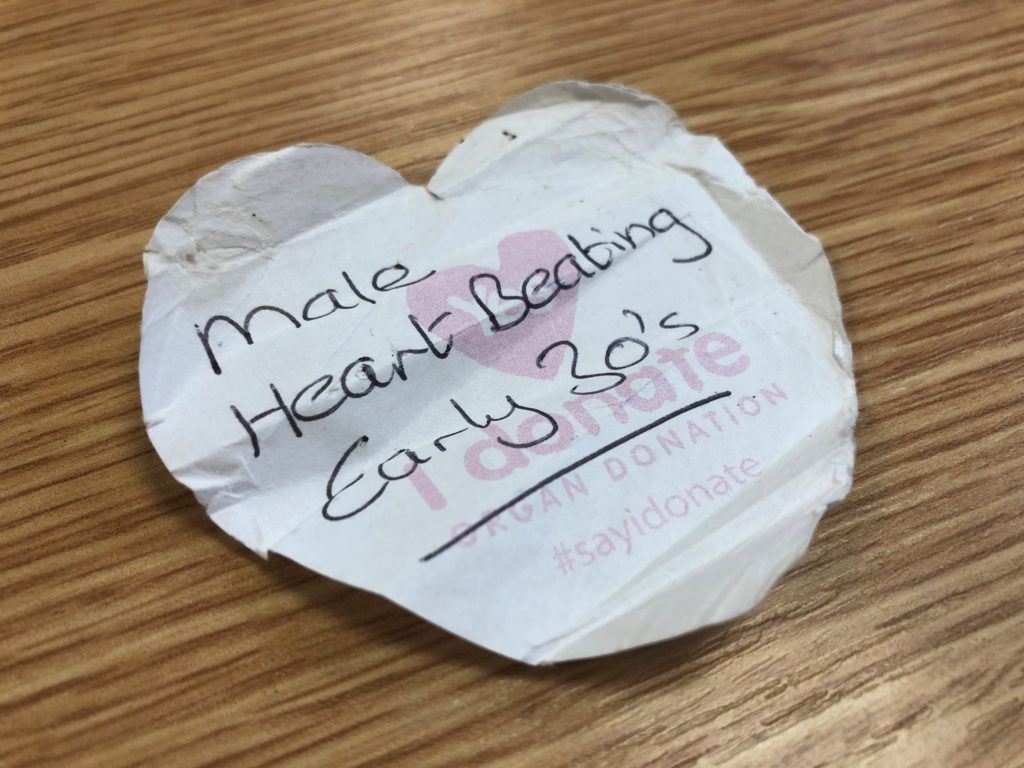 All the couple ever found out about Nick’s donor was that he was a man in his early thirties, and his heart was still beating due to being on life support. Those details were written on a small piece of paper by a nurse which Donna always keeps with her as a reminder of the gift they were given that day.

She said: “The kidney has not done anything except excel in Nick’s body – that’s very unusual – he’s not had to have any dialysis. It’s a real success story.”

Nick was diagnosed with polycystic kidneys in June 2000 after being extremely unwell. He was vomiting, had constant urinary tract infections, spot bleeding and suffered regular changes in his blood pressure. His mother, sisters and aunt all have some form of kidney disease too, but three months later he was also told that he had multiple sclerosis (MS) at the age of just 33 and in the blink of an eye he had two complex medical conditions to manage.

As time went on the cysts became more profound, they grew and grew to the point where Nick’s kidneys were the size of rugby balls and put his other vital organs under extreme pressure. In January 2016 his kidney function dropped significantly and he had to have one of them removed. The kidney, which is normally the size of a fist, weighed 7lb 5oz and was heavier than his step grand-daughter who was born shortly after the surgery, weighing 7lb 1oz.

It was after the nephrectomy – the surgical removal of a kidney – that he started having kidney dialysis at the Primary Care Centre in Colchester.

Nick’s illness is something he and Donna, who is also living with MS, have tackled together with a positive outlook, helped and supported along the way by Renal Unit sister Amanda Haralambous and her team.

Donna said: “There’s been some really difficult challenges along the way, but the staff at the Renal Unit are the most dedicated, friendly, kind and caring team. They go above and beyond and they work so hard. We’re really grateful to the whole team, they keep everyone’s morale up.

“It becomes like a family, you get involved with the staff and get to know other patients and their families. You end up seeing people at the dialysis unit more than you do your own family. We’re still in contact with some of the friends we’ve made there.”

Life before and after transplant

What Nick could eat and drink changed drastically after he had the surgery, but the biggest difference for him was no longer having to go to the dialysis unit for treatment three times a week.

He said: “It’s a means to an end because it kept me alive, but it’s very time consuming and tiring – it’s at least five hours each time. Some days on dialysis my blood pressure would drop, the alarms would go off and the crash teams had to be called to resuscitate me – I had to go to A&E once or twice.”

“I feel so much better in myself now, I was falling asleep all the time and was so weak. The weakness in my kidneys made my MS significantly worse and the neurologist worried about how long that could carry on for.”

Donna said: “His kidney function just went down and down, he was quite near the end of his life. We kept staying positive, but it was shatteringly tiring. He could do very little and was going downhill in front of my eyes. He wasn’t the same man, he is always smiling and laughing and has a good sense of humour, but his energy levels had gone.”

“We do miss it (the dialysis unit), we miss the people and the regularity of it. You think you won’t, but you do. We had all this time to fill so we started going to the cinema.”

Nick recovered well after the surgery and now goes for check-ups at Addenbrooke’s Hospital every two months. He will stay on anti-rejection medication for the rest of his life, but is back to the smiling and happy man he once was.

He said: “Staying positive is key.”

The importance of organ donation

New organ donation legislation is due to come into effect in England next year.

Max and Keira’s Law passed through its third reading in the House of Lords in February and is expected to receive Royal Assent within the next few weeks.

The change in law will mean that, unless you choose to opt out or are in one of the excluded groups, you will be considered to be a potential organ donor when you die. Those who are covered by the change will still have a choice about whether they want to be an organ donor and their families will still be involved before organ donation goes ahead. 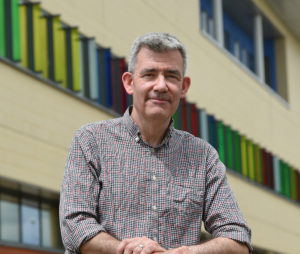 He said: “We take organ donation really seriously. Whenever there’s a potential donor we always explore it, and we identify people who could have been donors in meetings, realising every potential donor could save several lives.

“Public awareness in Suffolk and Essex is something we can work on. It’s something we all need to think about for the common good.

“If you think there’s an event that may result in organ donation, there’s a whole team of locally trained nurses who know the sensitivities to make the process as straight forward and appropriate as we can.

“We know too at the most awful of times many bereaved families take comfort from the fact it helps others and there are some benefits that can come from that bereavement.”