A senior radiographer who helped set up Ipswich Hospital’s first CT service has spoken of the changes she has seen and the enjoyment she has taken from her career as she prepares to retire after nearly 40 years at the trust. 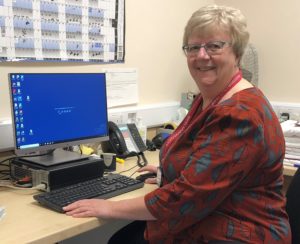 Lynette Bulley began working at the hospital in January 1978 after completing her training at Addenbrooke’s. She was quickly promoted to a senior position running the outpatients’ department around 18 months later, before going onto set up the CT unit alongside colleague Judy Wright in 1981 following a successful public fundraising appeal.

Lynette took time off in 1989 after her twin daughters Emma and Kate became the most premature babies to be cared for at Ipswich when they were born at 26 weeks. She returned to clinical duties in 1991 before going onto take responsibility for radiology services in inpatients, theatres and endoscopy.

“I have thoroughly enjoyed my career and haven’t regretted a single day of it,” said Lynette, who lives in Suffolk. “Radiography is a fantastic profession and incredibly varied, while I’ve also been lucky enough to work with some really lovely people, which has made all the difference.

“Technology has moved on so much since I started my career. I trained on a CT scanner which used a water bag as a barrier between the patient’s head and the x-ray. One of those machines is now in the Science Museum, which makes me feel old!

“The way that we work has also changed, as we used to use dark rooms to develop our images, then moved to automatic processors and day light systems, and now everything is completely digital. The quality of CT and MRI images has improved significantly over the years, but general radiology has stayed very much the same – even when I started my career, the quality of the images we could produce was just remarkable and had incredible detail.

“I plan to spend my retirement developing my interests and enjoying hobbies such as calligraphy and walking, while my husband and I also hope to travel. I will miss the job, the patients and my colleagues, but I know that it’s the right time for me to start the next chapter in my life.”