‘If you’re going to have a cardiac arrest, the best place to have it is a hospital!’

Home > ‘If you’re going to have a cardiac arrest, the best place to have it is a hospital!’

A grandfather who suffered a cardiac arrest while visiting the outpatients’ department at Ipswich Hospital has thanked the “faultless” NHS staff who leapt into action to save his life.

John Ashbee (pictured below) had taken grandson Toby (21) to a physio appointment in September when his heart stopped beating and he lost consciousness. Quick-thinking staff immediately sprung into action and successfully resuscitated the 73-year-old before transferring him to the cardiology department, where he was immediately fitted with two stents.

Just hours later, John was sitting up in bed and asking when he could return home to Kesgrave. He says he now feels better than he has for some time – and will be forever grateful for the care he received at the hospital, which is run by East Suffolk and North Essex NHS Foundation Trust (ESNEFT). 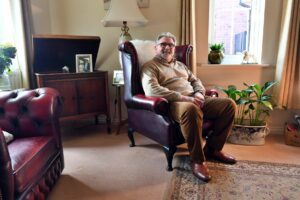 “Toby and I were chatting in the waiting room and he thought I’d fallen asleep as I suddenly went quiet,” said John, who is married to Penny and works part time in a pharmacy. “When he couldn’t wake me, he called for help – and that’s when the hospital staff leapt into action.

“They were just brilliant and acted fantastically. I couldn’t have asked for better if I’d been paying thousands of pounds for my care – I really did receive a top notch service.

“The NHS gets a kicking from time to time but I can’t speak highly enough of it – when there is an emergency, the staff are perfect and there’s no messing about. I feel like such a lucky guy – if you’re going to have a cardiac arrest, the best place to have it is a hospital. If I had been in town at the time the outcome would have been so much graver and I don’t think I’d still be here today.”

John spent just two days in hospital before he was well enough to be discharged. He is now attending cardio rehab sessions and doing lots of walking while he further builds up his strength.

“It’s frightening how quickly it happened,” added John. “I’d had some chest pains and tests on my heart, but felt perfectly alright on that particular day.

“I now feel a lot better than I have for some time and want to say a huge thank you to the whole team for saving my life and the faultless care they gave me.” 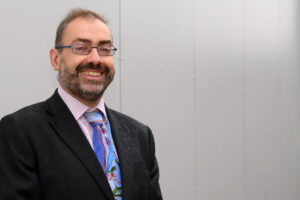 Dr Peter Brown, (pictured above) consultant cardiologist at ESNEFT and clinical lead for cardiology at Ipswich Hospital, looked after John following his cardiac arrest. He said: “Staff from various departments responded quickly and worked together incredibly well to resuscitate John and help to save his life. They all deserve huge credit for their actions.

“We are really pleased that John is making a good recovery and wish him well with his continued rehabilitation.”