Multi-million pound plans to build a welcoming new children’s department at Ipswich Hospital have been given the go-ahead.

Ipswich Borough Council has granted planning permission for the scheme, which will see the existing unit completely remodelled and refurbished to create a child-friendly environment fit for the 21st century.

The number of beds, isolation cubicles and clinic rooms will be increased, while dedicated areas will be available for patients who need physiotherapy or have diabetes or cystic fibrosis.

A separate dining room and two-bed high dependency area will also be created, along with multiple break-out play areas. In addition, more space will be available in bays for specialist equipment, or for parents to stay overnight.

Dr Lauren Filby is clinical lead for paediatrics at Ipswich Hospital, which is run by East Suffolk and North Essex NHS Foundation Trust (ESNEFT). She said: “This is fantastic news and another major step forward for this exciting project, which will transform the experience which young patients and their families have when receiving treatment.

“The project will allow us to create a modern, calming environment which matches the high standards of care our patients already receive while also significantly improving the facilities which are available.” 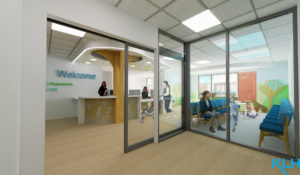 An artist’s impression of how the new unit could look

The project is being jointly funded by ESNEFT and The Children’s Appeal, which is being run by Colchester & Ipswich Hospitals Charity.

Launched in 2018, the appeal has so far raised £645,000 after receiving support from the local community, as well as Suffolk superstar Ed Sheeran and local farmer and TV presenter Jimmy Doherty. The charity is now asking for the public’s help to raise the final £205,000 so that work on the project can begin.

Mandy Jordan, associate director of Colchester & Ipswich Hospitals Charity, said: “The charity is hugely proud to be a partner in this exciting project and would like to thank everyone who has so generously supported our appeal so far.

“All the money raised and donated will go towards creating a state-of-the-art centre from which our hard-working staff can deliver a gold standard of care for all of our young patients.”

For more information about The Children’s Appeal or to support the fundraising drive, visit the Colchester & Ipswich Hospitals Charity website.

The children’s department transformation is one of a number of building projects taking place at Ipswich Hospital. Plans are also underway to develop a new urgent treatment centre and emergency department while a new breast care centre will also be built thanks to another partnership between ESNEFT and Colchester & Ipswich Hospitals Charity.