Patients are being treated for the first time at Colchester Hospital’s new, state-of-the-art cancer centre after a successful five-year fundraising campaign.

The Collingwood Centre is set to transform and improve patient care for people living with cancer in north Essex.

One of the first people to receive treatment in the £3.25million unit was Roger Sharman, 75, from Ardleigh. He was diagnosed with multiple myeloma in March 2016 and receives chemotherapy and immunotherapy alternately every two weeks at the hospital.

He visited The Collingwood Centre on Monday 11 November for the first time. 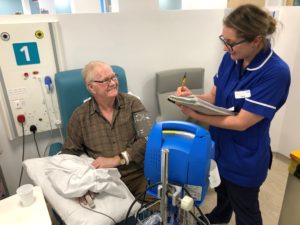 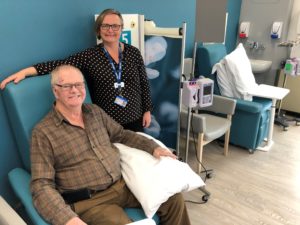 “Where we were before was getting a little bit dated so this is a fresh start and it will mean a lot to the staff too.

“I’ve been seeing the same nurses and faces for the last three and a half years, you get to know them and the other patients – that means a lot to me.”

The Collingwood Centre is more modern, comfortable and welcoming, providing a significantly better experience for patients, their families and carers. It will replace the hospital’s now merged Mary Barron Suite and Haematology Day Unit.

Making the plans a reality has been made possible thanks to the Cancer Centre Campaign, a £3.25million appeal launched in 2014 and run by Colchester & Ipswich Hospitals Charity.

Nick Hulme, Chief Executive of East Suffolk and North Essex NHS Foundation Trust (ESNEFT), which runs Colchester Hospital, said: “We are so very grateful to all the people who have given generously and fundraised tirelessly to help us build The Collingwood Centre.

“Thanks to your support, we can now offer so much more to our patients, as well as their families and carers, to improve cancer services in north Essex.

“It is so important when giving care, particularly to patients receiving regular treatment, that the environment is a calming and comfortable one. This is what we have now – a fantastic unit not only for our patients, but for our staff to work in too.”

Caroline Bates, Colchester & Ipswich Hospitals Charity’s head of fundraising, said: “We want to thank everyone who has supported the campaign to build The Collingwood Centre over the last five years, gifts large and small have helped make the vision of a world-class centre a reality.

“We are looking forward to opening the Cancer Wellbeing Centre next month, then we will have achieved everything we set out to do. Together we have made a big difference to cancer care for our community.”

The Collingwood Centre is on the first floor of the main hospital block and sits above Radiotherapy.

It brings that service, chemotherapy and haematology under one roof for the first time at Colchester Hospital.

Work is also nearing completion on a new Cancer Wellbeing Centre at Colchester Hospital. It will provide counselling, support services and holistic therapies in conjunction with The Collingwood Centre.

It is being built in a peaceful lakeside location close to the main hospital building so people can benefit from all it has to offer in a peaceful area of calm away from clinical areas.

The Cancer Wellbeing Centre is due to open in December. 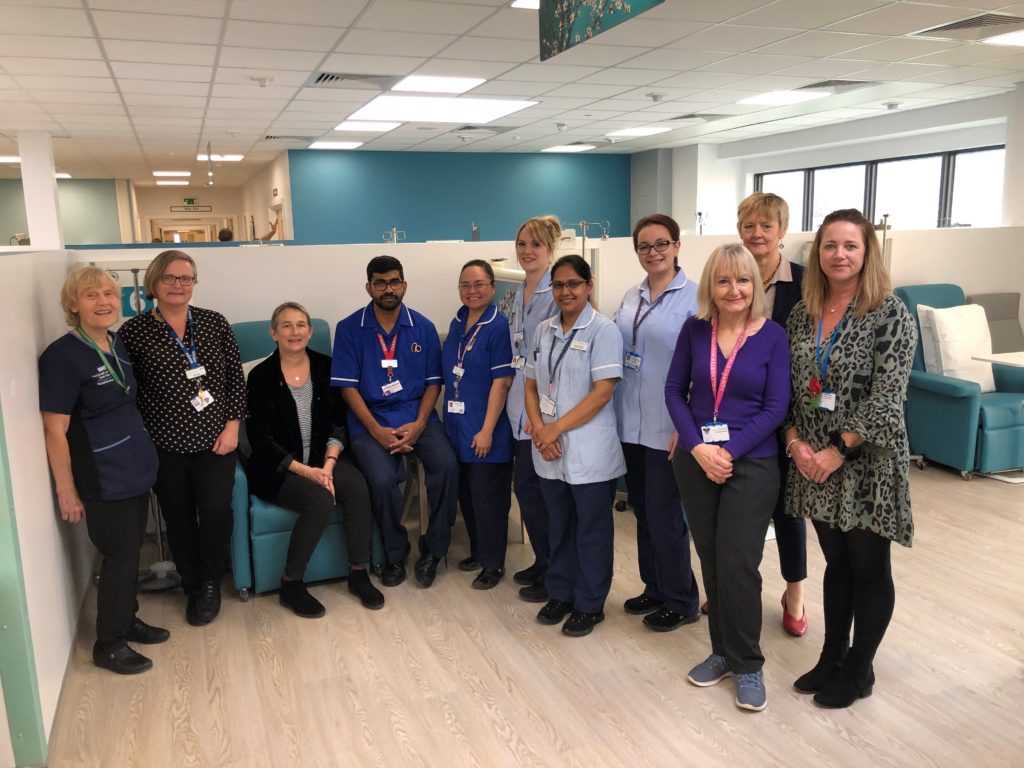