Expecting a baby over the last few months has been a worrying time for families, but as five new mums explained, giving birth in a pandemic was actually a really positive experience. The mums, who all gave birth in ESNEFT hospitals, shared their stories of what it was really like, even with the COVID-19 restrictions in place. 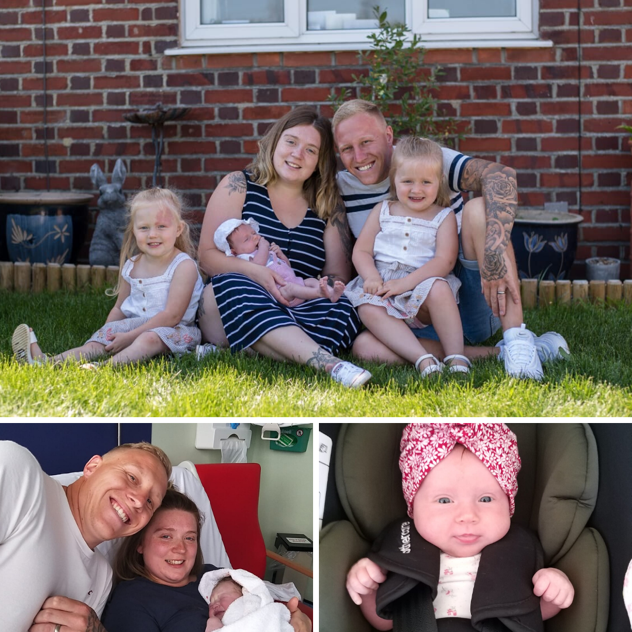 SOPHIA SOUTHEY, 25, welcomed her daughter Elsiemay into the world at Ipswich Hospital at the end of April. Sophia already has twin girls Evie and Emelia and lives with husband Daniel in Aldringham.

“It was actually a nicer experience giving birth this time than with the twins, because the midwives were so attentive and making sure I was OK all the time.

“I’d read a lot on social media, lots of different things about what would happen or could happen in hospital and if you could or couldn’t take your partner in.

“I was paranoid if Daniel had any symptoms he wouldn’t be able to come in with me and was worried I’d be alone. Luckily Daniel didn’t develop symptoms, so we were fine, although he couldn’t come in for the antenatal appointments or scans.

“On the day my contractions started and were three minutes apart, I called and went to hospital. I had to go to the main reception with my maternity notes and was taken to a room and examined. I was 6cm, so told to call Daniel to tell him to come in.

“Everyone at hospital was absolutely brilliant, even though you couldn’t see their faces. My midwife Marie explained everything, and even stayed an hour past the end of her shift so she could stay with me to deliver my baby.

“I gave birth at about 7pm on 28 April with Elsiemay weighing 6lbs 2oz. Marie was just so lovely, even when there was a little concern over Elsiemay being a bit blue. She stayed bubbly and kept our minds off it while they checked her.

“Daniel did have to leave. I didn’t really want him to go, but because I was prepared for it, it was OK, and I was so supported by everyone. They said ring the buzzer whenever you need us. It’s my first time breastfeeding and they were so helpful supporting me with it. It felt like being one big family in there.

“The experience was lovely, so lovely, and it was actually really nice being just Elsiemay and I and having that time together.” 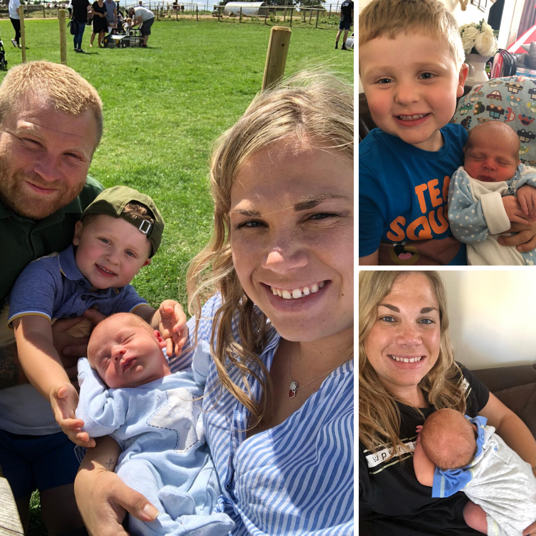 CLARE WILSON, 32, from Halstead, was very worried about her second birth at Colchester Hospital. Not only were COVID-19 restrictions a concern, but she’d developed pre-eclampsia in her first pregnancy with Callum, now three, so she was worried labour may be another traumatic experience. Giving birth to baby Cayden in June turned out to be a better experience than she thought in many ways.

“Callum’s pregnancy and birth was really difficult. As well as pre-eclampsia, I had to have a blood transfusion and forceps delivery. When lockdown happened, I was really really worried about giving birth after the first time with Callum. My partner Craig tried to calm me down about how it would be in hospital, but my anxiety wasn’t great.

“I developed gestational diabetes and had to be induced again at 38 weeks. I was on the ward on my own, but it was such a positive experience! It helped that is was my second labour of course, but the doctors and midwives were so amazing.

“Even though they had to wear masks throughout my labour, it was fine – business as usual really. You could tell from their eyes they were talking to me. They went above and beyond to help me and communicate with their body language.

“I was induced on the Wednesday and gave birth on the Friday. Craig had said just go in and boss it. He was allowed to come in with me when I was 2cm dilated and moved to the delivery suite to have my waters broken. He stayed with me for 18 hours in total, over the time I gave birth to Cayden. I had to have forceps again, but no blood transfusion and I stayed positive.

“I did have to stay in hospital until 11.30pm on the Saturday night, so it was just me and Cayden, but actually it gave us some bonding time, just the two of us, without the usual busyness of the maternity ward.

“The midwives encouraged us to have our curtains open, and it meant all of us chatted. It was so nice as there weren’t as many people, and we were all looking after each other’s babies while we went to have a shower. It was a really good experience.

“The staff were just amazing throughout. They kept me up to date, kept us safe and got us home as soon as we could. I’m very grateful.” 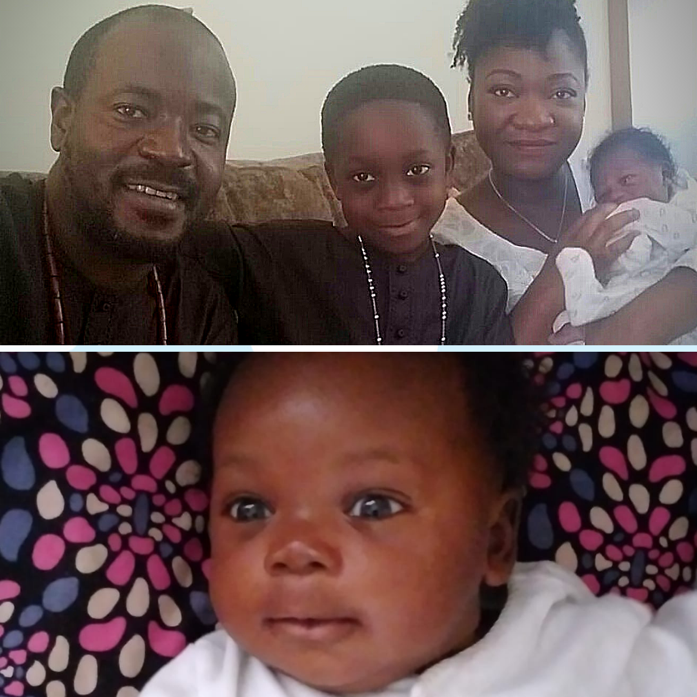 DR VICTORIA ALABI, a GP from Colchester, gave birth in May to baby girl Morayo. She lives with husband Wale and five-year-old son Oreoluwa. Victoria felt confident about going into Colchester Hospital to give birth and was reassured by the lengths staff were going to to protect patients.

“I feel safe in hospitals, so I wasn’t worried about giving birth there. I had a bleed at 30 weeks of pregnancy, so had been to hospital for a scan and I could see how everyone was stepping up with masks and protective equipment – that gave me the confidence about the birth.

“Wale and I had discussed what we’d do when I went into labour, as Oreoluwa would then need to go somewhere else, which would put him at risk with COVID. So we decided to keep everyone safe, I would go into hospital and give birth by myself. It was the best decision for the whole family.

“I’d planned a VBAC (vaginal birth after caesarean) but had an elective c-section booked for 41 weeks. At 39 weeks my midwife gave me a sweep, then I had to go into hospital for a check a few days later as had reduced foetal movements and they gave me a sweep again. By 11pm that night ‘boom’ labour happened fast.

“We woke up Oreoluwa and Wale drove us to hospital and dropped me off at the door – although we forgot my suitcase – and by 1.48am I’d given birth to 7lb Morayo.

“Everyone was so professional and did everything to keep us safe. You couldn’t see their mouths but you could see their eyes, although I kept my eyes shut for most of the birth!” 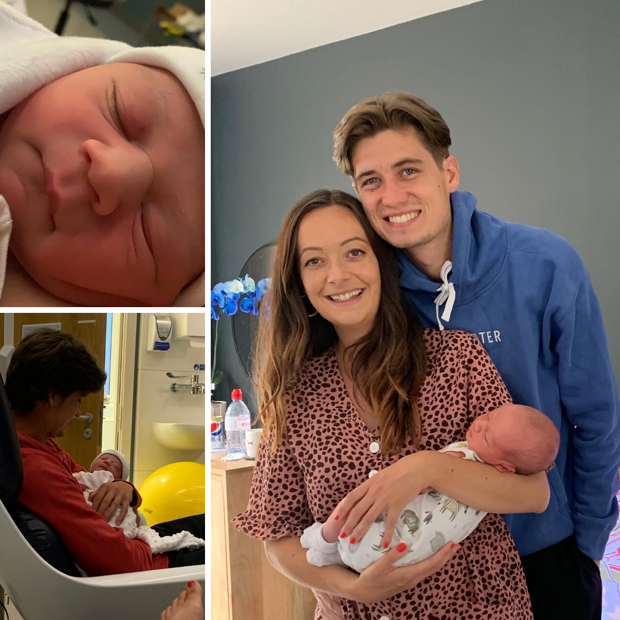 RIANNA FRY, 28, had her first baby Bodhi at Colchester Hospital. Rianna, who works in communications, was most worried about the effect COVID-19 would have on the hypnobirthing classes she’d planned to attend with partner Elliot.

“Although Bodhi was my first baby, I felt quite calm about labour, but when lockdown happened, I really didn’t want to miss the hypnobirthing classes. Elliot and I have been chilled about the whole thing, but we’d been waiting for those classes to know more about the birthing stages.

“The classes were of course cancelled in person, but we did get to do them online, and actually it meant we were doing them our own environment, using my own birthing ball and cushions – so it was probably better really.

“With my labour, I had a sweep, and contractions started six hours later, and I stayed at home. Then my waters broke although there wasn’t any liquid, but everything kicked off really quickly after that. Elliot took me to hospital, it was about 11pm at this point, where I was in triage by myself while he waited in the car.

“Eventually I was moved from triage to the Juno suite (the midwife-led unit), and the midwife said I was handling the pain really well and was actually 6cm dilated. Elliot could then come in and the whole experience was incredibly special. I had a water birth and we were left to it and I was left to trust my body. The midwife was amazing and so are the facilities there.

“Bodhi arrived at 1.46am and we all stayed until midday just to have all the checks done. Everyone was really lovely and it was a special birth.” 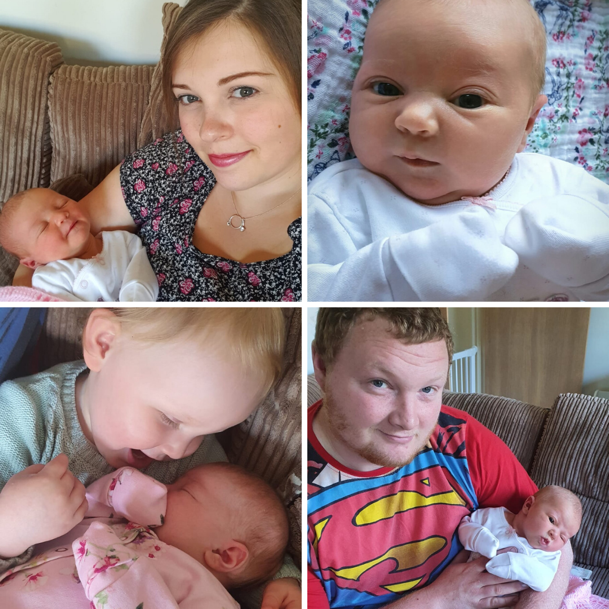 “Before I gave birth I worried a lot about what was going on at hospital and what it would be like, but as soon as I was there it was fine. I’d had such a supportive midwife – Kayleigh Salter – through my pregnancy and she made me feel so comfortable about what to expect.

“My contractions started at about 4.45am on 12 April and I phoned the hospital straight away. I went into Ipswich Hospital and the midwife examined me straight away while Josh stayed in the car.

“I wasn’t dilated enough to stay, so was told I could either go home, have a drive or take a walk, so we went for a drive. When we went back a little later, I was 3cm dilated and told Josh could come in, which made me cry.

“Throughout labour the midwives were talking to me about how Josh and I met, just having general conversation to keep everything flowing nicely!

“I gave birth to Emma at 1.46am and we’d left hospital by 1pm that afternoon.

“I would say there really isn’t anything to worry about. You can think about all the issues – everything that may or may not happen with everything going on. But it really was fine.”