A research thesis written by a Colchester Hospital oncologist has been named as the University of Cambridge’s best-written clinical thesis.

Dr M.B Mukesh’s thesis on the advancement of radiotherapy in breast cancer patients, won the university’s Ralph Noble award for 2017/18.

The 40,000-word document was researched and crafted over six years and his findings have already resulted in positive changes at Colchester Hospital and elsewhere.

Dr Mukesh, who has worked at Colchester, said: “It was an amazing feeling when I discovered I had won the prize. I was not expecting it. 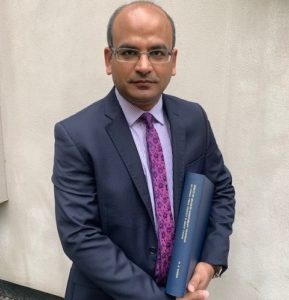 “I wrote the thesis alongside carrying out my clinical work and I am very proud that it was considered to be the best across the whole of the University of Cambridge for that year.”

Dr Mukesh, who was recently awarded a Doctorate of Medicine from the university, has had more than 30 research papers published.

He was awarded the Fellowship of the Royal College of Radiologists in 2010.