“Hospital staff saved my life, no doubt about it” says COVID survivor

A man who battled a collapsed lung, pneumonia and COVID-19 said he feels very lucky and grateful to the NHS staff who saved his life. 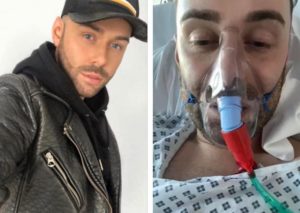 Paul Godfrey developed COVID-19 in March and became very poorly with what he thought was a chest infection. Despite taking antibiotics and steroids, he wasn’t recovering.

When he finally went to Colchester Hospital five days after developing symptoms, doctors told the retail worker his lung had collapsed and he had developed pneumonia. He was tested for COVID-19, and although Paul didn’t think he had the condition, the result came back positive.

He was rushed to intensive care with a nurse by his side 24/7 and began treatment. 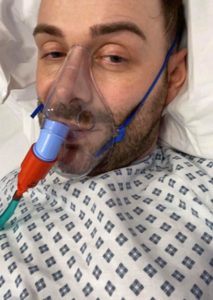 Paul, who was 31 at the time of diagnosis and has the lung condition bronciectasis, said: “There’s no doubt about it – everyone who cared for me saved my life. I would not be here today if it wasn’t for them.”

Paul, who lives in Frinton, had caught it so early on, he wasn’t aware some of the symptoms, such as losing your taste, was related to the virus. “I had everything – the cough, sore throat, hot sweats, breathing issues, as well as losing my sense of taste and smell. I also had these ridiculous headaches and I was struggling to walk.”

He added: “The team at Colchester Hospital was just phenomenal. It all happened so quickly. They were treating me for everything and saved my life. I can’t fault them. They are risking their lives to save ours.”

Paul is now at home recovering, but still struggling to walk and having problems with memory loss and exhaustion. Rather than focus on getting better, he said he was determined to give something back to the NHS, so launched a fundraising campaign and charity T-shirt sale.

He even recorded a video of himself when poorly, which went viral with more than 10,000 views and boosted his fundraising efforts. “I recorded the video as I wanted it to be a wake-up call to people in Essex and London who were saying it wasn’t worrying. The video has been viewed all over the world and people have said ‘thank you it’s made me think’.”

He added: “The campaign has raised around £2,300 and I’m so pleased. I’ve never done anything like it before. Everyone kept telling me I needed to relax and recover, but I just want to give something back. I wanted to turn something so negative into a positive.”

The money Paul has raised has been used to buy care packages for hospital staff, as well as help renovate the relative counselling and waiting rooms to create a more private and peaceful space for families to wait or speak to doctors about their loved ones.

He said: “I’m so grateful – I kept saying thanks to everyone. I remember saying it to a cleaner who looked so puzzled and I said ‘you are wonderful and you are risking your life.’ It’s so true, they really are.”